Cortaca Jug to be broadcast by YES Network 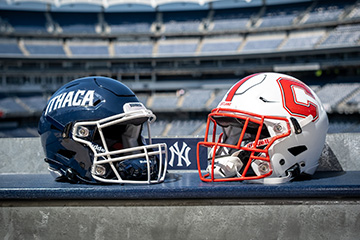 
The 2022 Cortaca Jug game between SUNY Cortland and Ithaca College will be broadcast from Yankee Stadium by the YES Network, the most-watched regional sports network in the United States, the Yankees announced today.

The network, the number one regional sports network in the nation, is the exclusive regional television home of the 27-time World Champion New York Yankees, the Brooklyn Nets, the 2021 MLS Cup Champion New York City FC and the New York Liberty. Having earned 134 Emmy Awards since its 2002 launch, it has been the most-watched regional sports network in the country for 17 of the past 19 years and made the list of Forbes’ top 10 most valuable sports business brands in the world for nine straight years.

To make the broadcast possible, kickoff for the Nov. 12 Division III rivalry game will be moved ahead one hour, from 1 p.m. to noon.

“The YES Network’s decision to broadcast this year’s Cortaca Jug game is terrific news for the SUNY Cortland community, including our alumni, parents and friends across the country and around the world,” said SUNY Cortland President Erik J. Bitterbaum.

“I hope many people are able to join us in person to celebrate our student-athletes and take part in one of the largest gatherings in SUNY Cortland history. Having the option to follow the game on the YES Network is the latest proof that Cortaca Jug really is ‘the biggest little game in the nation.’”

The game is available to all YES Network subscribers. Non-subscribers will be able to view a live stream of the game. Details about streaming will be shared when they are available.

Fans will also be able to follow the action online via:

A limited number of tickets remain available for purchase at cortacajug.com or ticketmaster.com.

Subject to availability, fans can choose to sit on the SUNY Cortland Red Dragons side of the stadium (third base/left field), or the Ithaca College Bombers side of the stadium (first base/right field). All tickets will be delivered digitally, and mobile phone presentation will be the only method of entry accepted.

The 63rd edition of the game will mark the first time Yankee Stadium will host an all-New York State college football game since Syracuse defeated Army, 27-15, on Nov. 7, 1964. Ithaca will be the home team for the contest.

The Cortaca Jug was first introduced to the Cortland-Ithaca football rivalry in 1959, when Cortland football captain Tom Decker ’61 stopped at a yard sale and purchased a $2 jug from a local farmer, thinking it could be used as a trophy for the annual game between the two teams. After meeting up with friend and Ithaca football captain Dick Carmean, the two painted the jug blue, gold, red and white in honor of both schools’ colors.

Once referred to by Sports Illustrated as "the biggest little game in the nation," the Cortaca Jug was played in 2019 before a Division III- record crowd of 45,161 fans at MetLife Stadium, with Ithaca prevailing, 32-20. In the most recent contest, Cortland defeated Ithaca, 28-27, at Cortland. Ithaca currently leads the Cortaca Jug series, 37–25.

Both teams are undefeated for the season at 4-0. The American Football Coaches Association poll ranks Cortland No. 10 nationally in Division III and Ithaca No. 12. The national D3football.com poll meanwhile ranks Ithaca No. 12 and Cortland No. 13.

“This is going to be a great game that every football fan should watch,” Bitterbaum said. “The change in kickoff time means fans will have to adjust, but I’m hopeful our community of Red Dragons will understand the value of the opportunity the YES Network is providing.”