How jailing a parent impacts a child 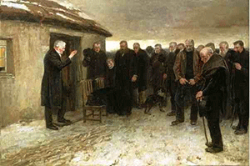 
Being confined to prison certainly costs the inmate a staggering sum in terms of opportunities, employment and prospects for the future.

But the way that having a parent in prison dashes the hopes of youth and takes a toll on the child’s well-being during crucial, formative years, is a little less studied.

Christopher Wildeman, who directs Cornell University’s archive of child abuse and neglect, will lecture on the discriminatory impact of mass incarceration in the U.S. on family health and well-being, at 5 p.m. on Tuesday, Sept. 24, at SUNY Cortland.

Wildeman, whose talk takes place until 6:30 p.m. in Sperry Center, Room 104, will contrast how America treats its law offenders with Denmark’s approach to criminal justice that emphasizes rehabilitation.

The series events are free and open to the public.

Wildeman is the 2013 recipient of the Ruth Shonle Cavan Young Scholar Award from the American Society of Criminology.

A professor of policy analysis and management and sociology, Wildeman is a provost fellow for the social sciences, director of the Bronfenbrenner Center for Translational Research and a senior researcher at the Rockwool Foundation research unit in Copenhagen, Denmark.

His research and teaching interests concern the consequences of mass imprisonment, including inequality with emphasis on families, health and children.

Prior to joining Cornell’s faculty in 2014, Wildeman served as an associate professor of sociology at Yale University. He received his Ph.D. in sociology and demography from Princeton University. From 2008 to 2010, he was a Robert Wood Johnson Foundation Health & Society Scholar and postdoctoral affiliate in the Population Studies Center (PSC) at the University of Michigan.

Additional talks in the “Debt” series through mid-October are as follows:

FRIDAY, SEPT. 27. Juan Gallego, an associate professor and artist at Universidad Rey Juan Carlos in Madrid, Spain, will discuss his work on immigration as well as his next graphic novel, The Plague, from 9:30 to 10:30 a.m. in Dowd Fine Arts Center’s Dowd Gallery. Gallego, who earned his Ph.D. in 2004 at the Universidad Complutense School of Fine Arts, currently teaches painting techniques and illustration there. He is the author of several published comic book short stories. In November 2018, Gallego released a graphic novel, Como si Nunca Hubieran Sido (As if They Had Never Been), about the tragic death of immigrants in the Mediterranean Sea.

Featured Conversations in the Disciplines guests as well as Cortland faculty, staff and students are invited to contribute original works, which the committee plans to publish the collected works under the Global Institute for Sustainable Prosperity’s ongoing book series under an agreement with publisher Palgrave-MacMillan. The institute is an independent public policy think-tank dedicated to the promotion of interdisciplinary research.

Above left is a painting of a 19th century Scottish funeral. During this time, many believed that eating a piece of bread or pastry from the deceased individual's face or chest absolved them of their sins as they passed into the afterlife. As the tradition evolved, Sin-eaters were people who got paid to absorb the sins of the recently deceased.