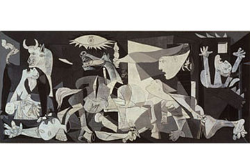 
Many consider art to be benign and inconsequential or the impractical province of the wealthy.

SUNY Cortland’s Cultural and Intellectual Climate Committee (CICC) will hold a yearlong series focused on the essential nature of art and imagination in society, titled “Art and Everything.”

This year’s series turns on a statement by Bertolt Brecht, the 20th century German poet, playwright and theater director: “Art is not a mirror held up to reality, but a hammer with which to shape it.”

“Art and imagination ... interrogate, inform and entice,” said CICC Committee member Howard Lindh, an organizer of the series and scenic designer in the College’s Performing Arts Department. “Art is investigative, emotional, practical and provocative. It helps us understand life and transform the world in which we live.”

“Art and Everything” will examine the power and purpose of art across the disciplines,” added fellow CICC Committee member and organizer Scott Moranda, an associate professor of history.

“The theme will facilitate and drive a wide ranging discourse that questions the function of art in our culture and examines the many ways art confronts current concerns of that culture, such as Black Lives Matter, gender inequity, climate change, gun violence, or growing economic inequality.”

The Cortland Old Timers’ Band will perform a concert titled “Strike Up The Band” at 7 p.m. on Thursday, Oct. 6, in Old Main, Brown Auditorium.

Kathryn Kramer, SUNY Cortland professor of art and art history, will lecture on “Guernica” at 5 p.m. on Thursday, Oct. 13, in the Dowd Fine Arts Atrium, the site of a life-sized reproduction of the famous work by Pablo Picasso.

A program of readings and comparisons will focus on “Aristophanes Meets Spike Lee: Lysistrata to Chi-Raq,” at 4:30 p.m. on Tuesday, Nov. 1, in Brockway Hall, Jacobus Lounge.

Members of the campus and community are invited to gather in the Dowd Fine Arts Atrium for a program titled “Guernica: Poetry and Music,” at 4:30 p.m. Wednesday, Nov. 16.

Wrapping up the fall scheduled events in the series, Gregg Weatherby, SUNY Cortland lecturer in English, will portray the character of the famous author Dylan Thomas as he presents “A Child’s Christmas In Wales” at 7 p.m. Thursday, Dec. 1, in Brockway Hall, Jacobus Lounge.

In addition to the lectures and performances, the committee has continued its tradition to invite the campus to engage with common experiences and readings.

“We hope that all of us on campus will have an opportunity to engage with the following common experiences,” Moranda said.

The common reading is Citizen, by Claudia Rankine. Her volume of prose poems offers a searing account of what it means to be a woman of color in this time and place. Her work has been described as “lyrical and unrelenting.”

The common painting is “Guernica,” by Pablo Picasso. Art historians note that “Guernica” represents the artist’s response to the bombing of the Basque village of Guernica in northern Spain by German and Italian warplanes during the Spanish Civil War. Students will paint a life size — more than 11 feet tall by 25 feet wide — duplicate of the original on the wall of the Dowd Fine Arts Atrium.

The common film is Spike Lee’s “Chi-Raq,” which was shown twice and will  be screened again in the spring semester. “Chi-Raq” is a modern day adaptation of the ancient Greek play Lysistrata by Aristophanes. After the murder of a child by a stray bullet, a group of women led by Lysistrata organize against the ongoing violence in Chicago’s south side creating a movement that challenges the nature of race, sex and violence in America and around the world.

For more information, contact CICC co-chairs Moranda at 607-753-2052 or Lindh at 607-753-4101. The campus community is invited to visit @SUNYCortCICC to share their Twitter feedback on “Art and Everything.”