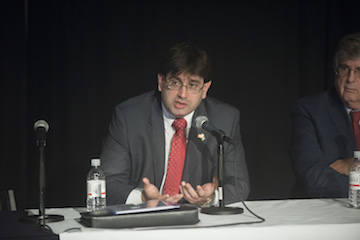 
Miguel Fraga, the first person to hold the title of first secretary at the Embassy of Cuba in more than half a century, will discuss U.S.-Cuba relations at SUNY Cortland on Wednesday, Sept. 28.

Fraga has been one of the communist nation’s top diplomats in the United States since the two countries re-established diplomatic relations a little more than a year ago. His talk, “U.S-Cuban Relations, Past, Present and Desired Future,” will trace the troubled history of the neighboring nations, clarify the Cuban perspective of current relations and explore opportunities for the future.

“Miguel is a great guy, very easy going and an interesting speaker,” said Jordan Kobritz, chair of SUNY Cortland’s Sport Management Department and the coordinator of Fraga’s Cortland visit. “This is a great opportunity for students.”

The first secretary will speak at 7 p.m. Wednesday in Moffett Center, Room 2125. The lecture is free and open to the public.

Fraga is visiting SUNY Cortland for a second time. Last spring, he participated in a first-of-its-kind symposium on how sports, business, academics and diplomacy can help build bridges between Cuba and the United States.

Since then, Kobritz and other SUNY Cortland faculty and administrators have traveled to Cuba in an effort to establish ties with academics, artists and athletes connected with universities on the Island nation. A College goal is to send a group of students to Cuba next spring.

“The opening of relations with Cuba creates tremendous educational opportunities for U.S. universities,” said President Erik J. Bitterbaum. “We want SUNY Cortland to be one of the first to establish student and faculty exchange programs and explore other areas of cooperation that haven’t been possible for at least half a century.”

Relations between the U.S. and Cuba deteriorated quickly after the revolution led by Fidel Castro established a socialist state. They dissolved completely in 1961 following America’s failed Bay of Pigs invasion to overthrow Castro. For more than a century, Cold War tensions and strict economic sanctions acted as an invisible wall between the United States and Cuba, which lies 90 miles off the coast of Key West, Fla.

As the Cold War thawed, U.S.-Cuban relations slowly improved, with the nations agreeing to re-establish diplomatic ties and open embassies in June 2015.

That year, Fraga was appointed to his current post. Since 2006, he had worked in the Ministry of Foreign affairs’ North American and U.S. divisions and in the Office of the Minister. From 2008 to 2011, Fraga served at the Cuban Embassy in Canada. From 2003 to 2008, he was a member of the People's Power Provincial Assembly of the City of Havana, which is the provincial parliament in Havana.