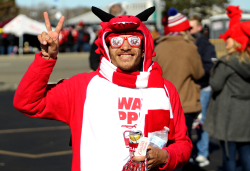 
There were plenty of Red Dragons wandering through the ocean of parking lots surrounding MetLife Stadium in East Rutherford, N.J.

SUNY Cortland was about to take on Ithaca College in the annual Cortaca Jug football game on Nov. 16, this time in the home of the NFL’s New York Giants and Jets.

Then there were the 20 or so recent graduates who took Red Dragon spirit to heart.

Sam Deutsch ’15 encouraged a number of his former housemates to pick up Red Dragon costumes online and they mingled through all of the tailgating Cortland fans, trying to ramp them up before kickoff. His girlfriend, former SUNY Cortland gymnast Bri Michaels, also recruited a number of friends to the cause.

“We’re the Red Dragons and I just thought to myself, ‘How great would it be to have 20 Red Dragons show up to Cortaca?’" Deutsch said. "I put it to our group chat and they said, ‘We’re doing this.’”

A record 45,161 fans attended the 61st Cortaca Jug game, which routinely draws about 10,000 fans when it is held on the Cortland or Ithaca campuses. The University of St. Thomas and Saint John's University held the previous Division III record when 37,355 saw a game at Target Field in Minneapolis in 2017.

The rivalry, which was once referred to as “The Biggest Little Game in the Nation” by Sports Illustrated, has grown over the years. Former players like Lou Crispo ’10 love coming back to Cortaca Jug games to reconnect with teammates and keep the game’s tradition strong.

“The growth that the game has had since 1959, the first one, to now, where The New York Times is writing articles about breaking attendance records, is amazing,” Crispo said.

Crispo, an Eastchester, N.Y. native, was a senior defensive tackle when Cortland snapped a three-game losing streak in the series, beating Ithaca 20-17 in 2010. He was proudly wearing his No. 56 jersey in the parking lot and likened the pregame atmosphere to that usually associated with much larger schools.

“Everybody has bought in,” he said. “From an outsider perspective looking in, this might as well be a Division I game. It has that big-game feel. That’s why well before our time it was deemed ‘the biggest little game in the country.’”

Kyle Schneider ’17, who played quarterback at Cortland from 2013 to 2016, was chatting with former teammates and perfect strangers alike. No matter whether Cortland graduates played football or not, the game offers an opportunity for people to come together.

“I know a lot of people care about the outcome of the game, but I’ve been talking to some people today and it’s the first Cortaca game they’ve been to,” Schneider said. “We graduated two years ago and this is the first time we’ve been back together since we graduated. I think that applies to a lot of people here.”

When it was announced in November 2018 that the 2019 edition of the Cortaca Jug would move to MetLife Stadium, Schneider, a Hillsdale, N.J. native, bought 105 tickets so that friends and family could sit together in a block.

He sold them all within two weeks.

As a high school student, the idea of one day playing in a Cortaca Jug game was a major part of the appeal to Schneider.

"When you're visiting and you see Cortland has some very good facilities, to think that the whole stands could be filled for a game, that was an aspect of why you want to go there," he said. "It's an appealing factor of why people go to Cortland and it lives up to it. It's not just people talking the talk, they also walk the walk."

As for Deutsch, an English teacher who coaches wrestling and girl's flag football at Martin Luther King, Jr. High School in Manhattan, he recently took two students to Cortland on a college visit. Sure, they talked about the Cortaca Jug game, but they also talked about the bond that Red Dragons have long after they graduate.

Whether they’re wearing a Red Dragon costume or not.

“Part of it is, I want them to go to Cortland because I went there and I always push for Cortland,” Deutsch said. “What I told them is that Cortland is a magical place. There’s a piece of my heart there and I think that’s true for everybody.

“Everybody I know who went to Cortland, there’s a little more love in the air when you see each other.”