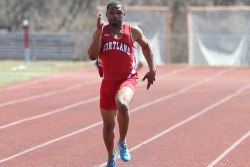 
NOTE: Due to a passport issue that occurred after this story was posted, Garcia will not be able to travel to Japan for the Olympics.

When Melique Garcia ’15 joined the track and field team at Watervliet (N.Y.) High School, he had one goal.

He wanted to be the fastest football player around.

When Garcia settled into the starting block for sprinting events at those high school meets, he was dreaming about using his speed to evade tacklers and reach the end zone.

After an anterior cruciate ligament injury during his senior year of football, track, in the end, turned out to be his life’s passion. Garcia went on to become a three-time All-American in indoor and outdoor track and won six SUNYAC titles at SUNY Cortland.

He hasn’t stopped running since. Garcia qualified for and ran at the 2019 World Athletics Championships in Doha, Qatar, one of the largest and most prestigious meets in the world, ranking 12th out of 30 runners in the preliminary round.

That experience fueled him to keep striving for a spot in the sport’s pinnacle: the Summer Olympics.

On Saturday, July 31, Garcia will join 89 of the fastest men in the world as a competitor in the 100 meters at the Olympics Games in Tokyo, representing team Honduras.

“It didn’t hit me right away,” Garcia said. “A couple of days later, once the paperwork started coming in, I was like, ‘This is an actual thing.’ I was excited.

“But I have to treat it as a regular meet and stay focused on what I’m doing already. I can’t get myself too stressed out or too anxious about it because then I’m not going to perform well. I’m trying to make it to the final and come home with a gold and make it a big upset.”

Recruited to the track and field team in high school by his football coach, Erick Bernard ’99, Garcia rehabbed from his torn ACL to be part of a state champion relay team at the end of his senior year. Yet the college athletic opportunities he had hoped for, either in football or track, didn’t happen right away.

Garcia attended Hudson Valley Community College and SUNY Cobleskill before transferring to Cortland, where he found teammates and a coaching staff that both pushed him to the best of his abilities and made him feel at home.

Despite all of the success Garcia had in a Cortland uniform — in addition to his All-America and SUNYAC plaudits he was part of the school-record 4x200 meter indoor relay team — his favorite moments came in the behind-the-scenes time with teammates on the road to big meets like the ECAC Championships or the NCAA Div. III indoor championships.

“Besides playing video games in the dorm rooms with the team, it was the team bonding moments on those trips to Boston or Nebraska,” he said. “Just having that family bonding moment. It’s hard to find that in a lot of teams whether it’s high school or college, but Cortland had that family atmosphere and I loved that.”

An Achilles tendon injury forced Garcia to take some time off following graduation. But it wasn’t long before he saw results from Diamond League meets, an annual series of one-day track and field competitions that offer prize money to the top contenders.

And Garcia realized his best times weren’t that far off from those against whom he was competing.

So he started training and switched his national affiliation to Honduras to represent his father, Lorenzo Justianiao Melvin Garcia, a Honduran immigrant.

By 2019, Garcia’s efforts had resulted in a spot in the 100 meters at the World Athletics Championships in Qatar, where he shared the track with the world’s greatest athletes.

“It was surreal,” he said. “I never thought that I would be at that point and be on that big of a stage. Being there allowed me to soak in the moment of all my hard work. I’ve been blessed. I believe in God, so I can’t say it was all me. I’ve gotten there with guidance. I appreciated the opportunity and it put me in a different mindset now because I’ve had that experience. Instead of just sitting in the glamour and watching everyone else, I want to compete just like everybody else out there.”

With the COVID-19 pandemic postponing the Tokyo Olympics by one year, Garcia had additional time to train. He got a big boost of confidence when he was part of a new national record-setting 4x100 meter relay team at the Central American Championships in San Jose, Costa Rica on Dec. 29, 2020.

He returned to San Jose for the 2021 Central American Championships on June 26, focusing on individual sprinting events. It would be a make-or-break meet for Garcia, as Honduras, a nation that holds universality place allocation for the Olympics, can send just one male track and field athlete to the games.

Garcia placed fifth overall in both the 100-meter (10.72 seconds) and 200-meter (21.77) finals at the Central American Championships, unsure if he had done enough to earn Honduras’ lone spot.

It was. And Garcia can’t wait to test himself once again against the best of the best at the Olympics while also paying tribute to his family’s Honduran roots.

“Being born here in New York, I feel a type of honor and motivation to represent my father and bring back the honor to him for the work he put in to give us a better life,” Garcia said. “Without him, I wouldn’t be here.”

Garcia is expected to be the first SUNY Cortland student-athlete to compete in the Olympic Games in any sport since George Breen ’56, who medaled in swimming at the 1956 and 1960 games.

His rise has been inspirational to SUNY Cortland track and field and cross country head coach Steve Patrick ‘97, who admires Garcia for his relentless positivity.

“We’ve had a lot of folks over the years make it to U.S. trials,” Patrick said. “Melique very well could’ve gone down that path but watching him now representing Honduras internationally and chasing those dreams, he’s somebody who’s easy to root for. It’s a feel-good story.

“In high school, you wouldn’t have thought he’d be a guy who would do that. After his initial performances in college, both at Cobleskill and here, you didn’t think be at that level. It’s the adage of working really hard and being disciplined and sacrificing. He’s been a guy who has done that to a T. It’s such a great example for all the young men and women we have on the team right now.”

No matter what happens at the Olympics, Garcia will have his hands full with a variety of projects once he returns home.

When he’s not focused on his own training, working with young athletes and being a role model for the next generation of college students has become Garcia’s most rewarding projects. He knows what it takes to be a successful student-athlete as well as the value of being a college graduate. The experiences he had in the classroom and on the track prepared him to be an entrepreneur, a coach and an Olympian.

“That’s my big endeavor,” Garcia said. “I had my experience of going through high school with athletics and not having the ideal opportunities that kids from bigger schools might have had. I want to be able to give that back to my community and other athletes and help them get opportunities and create opportunities to have a better college career and better lives in general.”

Garcia can rattle off a list of names of young athletes from Watervliet he’s training. He knows their times, what they need to do to improve, what colleges they’re looking at and which schools might be better fits given their academic interests and their personal situations. He wants to help them get there and achieve their dreams, too.

And imagine how much Garcia’s influence means to those teenagers. Someone who went to the same high school they do. A business owner. A Red Dragon. An All-American. An Olympian.

“I just like to see the younger generation progress and prosper,” Garcia said. “It’s really hard to find people who care about somebody’s progress. For me, when I was growing up, I feel like I didn’t have that as much. And I want to give that to as many kids as I can. Your teachers might not care, other people might not care, but I care about how you’re doing in school or how your mental health is.