Musical Legacy Sculpture to be Unveiled 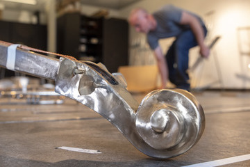 
Last year, a group of SUNY Cortland alumni and staff asked artist Scott Oldfield ’06 to figure out how to create a permanent reminder of an era when some of the world’s most famous musical performers played on campus.

On Saturday, July 13, they will unveil a sculpture with a beat.

The 10:30 a.m. ceremony and reception, which is free and open to the public, will introduce a new metal wall installation in the renovated bottom floor of Corey Union. The two-story arrangement of symbolic, stainless steel and copper instruments will be surrounded by hundreds of LED lights that flash in time to whatever music is playing in the popular student gathering area.

Free parking will be available to visitors for the unveiling in the ASC lot next to Neubig Hall, across Neubig Road from Corey Union.

The unveiling, part of the yearlong SUNY Cortland Sesquicentennial Celebration, highlights a full weekend of events commemorating Cortland’s musical legacy. They are held in conjunction with Cortland’s Alumni Reunion 2019, which marks the official close of the College’s 150th anniversary festivities.

“This era, 1960 through 1990, was a time when students gained more control over campus activities and the college circuit was filled with performers who were, or would become, household names,” said Kevin Pristash ’85, M ’91, director of campus activities and Corey Union and a member of the SUNY Cortland Alumni Association’s Musical Legacy Commemoration (1960 -90) Project. “This piece of art will remind people of the special role that Cortland played in launching some of music’s biggest careers.”

During that time, students booked, promoted and hosted campus shows by legends such as Billy Joel, Grateful Dead, Neil Diamond, the Eagles and dozens and dozens more. Some of those same students will return to Cortland for Reunion July 11 to 14.

Both they and music fans throughout the region will find plenty of activities in Cortland that weekend to trigger their musical memories.

On Friday, July 12, legendary Central New York musician Todd Hobin — who played at SUNY Cortland more frequently than any other artist during those decades — will perform a free concert in downtown Cortland as part of the Cortland Main Street Music Series.

Hobin is a singer, songwriter and leader of a popular regional band that opened for chart-topping artists such as the Beach Boys, Allman Brothers and the Kinks. He is also a music producer, studio musician, and creator or director of children’s television, movie scores, audio books and commercials for clients such as Coca Cola and Tri-Star Pictures and served as a panelist last fall during a public discussion of live college music during that era coordinated by the legacy committee. His downtown Cortland show starts at 7:45 p.m., July 12, in the parking lot of 64 Main St., rain or shine.

After the show, alumni fans are invited to attend a post-concert party at Hollywood Restaurant, 27 Groton Ave. Hollywood is owned and operated by David “Rock” Feinstein, former guitarist for heavy metal icon and Cortland native Ronnie James Dio, who also played frequently on campus. The party starts at 9 p.m.

Feinstein is among the speakers scheduled to present at the unveiling, joining others who will share their perspective on SUNY Cortland’s role in that era. Attendees can also view a collection of Cortland concert memorabilia from that era and chat with the alumni who experienced those musical events.

Campus visitors are also encouraged to attend a 1:30 p.m. reception Saturday at Memorial Library to see the Musical Library Exhibit and memorabilia display.

Sunday, July 14, is Dio Day in Cortland, an annual tribute concert and fundraiser that Feinstein chairs. Although it is not related to the College or the Alumni Association, the event offers an option for music fans and alumni to add another day of celebrating Cortland’s musical legacy that weekend. Dio, who fronted such legendary hard rock and heavy metal bands as Black Sabbath, Rainbow and Dio, performed at SUNY Cortland in the 1960s and early 1970s as Ronnie Dio and the Prophets and as the Electric Elves.