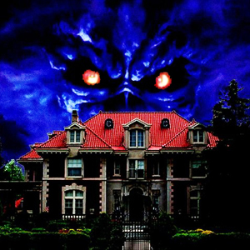 
Cortland’s historic Halloween Parade is being resurrected for the first time since 1997, and the newest version of this spooky street spectacle will finish in a new resting place: the Lynne Parks ’68 SUNY Cortland Alumni House.

A procession of ghosts, junior firefighters, celebrities and comic book heroes will walk down Cortland’s Main Street on Thursday, Oct. 30 — the day before Halloween — to the decorated mansion at 29 Tompkins St.

The parade’s arrival serves as a finale for a community “Halloween Extravaganza” that SUNY Cortland students will host at the Parks Alumni House.

The first-of-its-kind event will run from 4 to 7 p.m., offering spooky tours, Halloween activities and free refreshments to members of the community. During the extravaganza, decorated pumpkins will greet the trick-or-treaters when they arrive, and costumed students will guide young visitors on candy-gathering tours through the elegant rooms of the century-old downtown landmark.

The stately mansion’s main floor will offer coffee, hot cocoa and refreshments to the youngsters and their families. In the basement pub area, the children can try a variety of Halloween activities such as games and crafts.

The resurrected parade is based on an annual Cortland tradition that began in 1936 and thrived for more than 60 years. It is an independent community event organized by the Cortland Downtown Partnership and other local organizations.

“It’s actually two separate events,” explained Nicholas Koziol, interim manager of the Parks Alumni House. “At the house, it will be student-run but open to the community and the College.”

At 7:30 p.m., after the last of the parade participants have arrived at the Parks Alumni House, walking up the long driveway and gathering in the spacious backyard patio area, winners of the costume contest will be announced. Prizes will be given in the categories of most creative, scariest, cutest, most original, greenest (recycled), best group costume, and best family costume, said Jane Witty, event coordinator and facilitator for the Cortland Downtown Partnership’s (CDP) Promotions Committee.

“That was such a terrific and unexpected offer,” Witty said of the Alumni Association’s proposal to provide an atmospheric finish line for the parade. “We first planned having the parade end at the post office and we would then walk back to the lot where we started. This way, we get to have a little more of a too-do, with candy and games. It’s going to be a prettier program and more well-contained.”

“We get experience on how to plan and create different types of events,” said the Alumni Association’s event co-organizer Dana Korman, who teamed with Ashley Gray and Teresa Quartironi, two classmates enrolled in Professor of Communication Studies Kathleen Lawrence’s Event Planning course.

Quartironi, a student intern at the Parks Alumni House, suggested the Halloween party.

“Nick (Koziol) had wanted to host a Halloween event and we decided it would be a good fit for our class and our project,” said Korman, a communication studies major from Millwood, N.Y. “It probably would fall under the community-building type of event: to be fun for everyone and get community members involved.”

The volunteers needed to entertain the children and serve as street-side guards are expected to include SUNY Cortland alumni as well as members of the College’s Student Alumni Association, Greek organizations and athletic teams, Korman said.

Parade registration begins at 6 p.m. in the Elks Lodge at 9 Groton St. Participants will check in, register for the costume contest and at 6:30 p.m. to be marshaled into groups in the parking lot behind Main Street that is shared by the Community Dining Room and the Elks Lodge.

Main Street closes to new traffic starting at 5 p.m. to clear the roadway for the procession’s path. At 7 p.m., the parade will wend its way past Cortland’s downtown storefronts, where some dozen business owners plan to decorate their shops and cater to the kids, Witty said.

The line of costumed children and families on foot, in human floats and riding carts and bicycles then will pause at the Cortland Post Office, where the judges will inspect their costumes.

Crossing the intersection with Tompkins Street under the safety of city police officers, the parade will turn right and proceed along the sidewalk the relatively short distance to the Parks Alumni House steps, organizers noted. A line of SUNY Cortland Alumni Association volunteer safety monitors will be responsible for keeping participants away from vehicular traffic along the State Route 13 thoroughfare.

The community support comes from the City Council, the city police department and the city department of public works, Witty noted.

She had researched the former parade and found it was held almost continuously from 1936 to 1997 except for one year when a flu epidemic caused its cancellation. Most parades began and ended at Randall Field, followed by a bonfire, candy distribution or reception.

“The articles said they started the parade because they had problems with vandals on Halloween, young people kind of tearing things up that night,” Witty said. “And around the country lots of other Halloween parades formed around that time.

“I think the adults in the area are just as excited if not more than the children about it,” Witty said. “The kids who were in the old parade are now all grown up and thrilled to bring their own children to be in the parade.”

“Personally, I love Halloween. It’s a great holiday,” Korman said. “It would be fun to give something back to the Cortland community and seeing the kids have fun is our main goal.

“We would be hoping to have it as an annual event.”