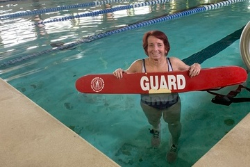 Recently retired from a long career of teaching Spanish and French and no longer substituting when she could because of the COVID-19 pandemic, Nelson was looking for a new challenge.

What if she got recertified to be a lifeguard, 50 years after she first took the test?

Nelson hit the books, studied up and passed the two written tests before jumping in the pool. The swimming portion of the certification included swimming 12 laps, treading water for two minutes, doing three simulated rescues and swimming on her back for 20 yards with a 10-pound rubber brick on her chest.

Not only did she pass the test, Nelson also did it as a person with scleroderma, a group of autoimmune diseases that may result in changes to skin, including thickening around the wrists. Nelson in particular deals with inflexibility around her wrists that makes swimming a bit more challenging.

“I was so relieved. It was really hard,” Nelson said. “I told the guy running the test that 50 years ago we did not use resuscitation masks. When you did CPR, you put your own mask on their mouth. We didn’t use gloves. We didn’t have rescue tubes. You just went and saved a person, put your arm around them and did sidestroke.

“Now I am going to lifeguard at the pool some and still teach my water aerobics.”

A semester abroad in Salamanca, Spain during her junior year was part of the inspiration that led Nelson to become a languages teacher. Teaching has been a perennial passion for Nelson, whether it is languages or swimming.

“I really didn’t want to take the course with a bunch of teenagers,” Nelson laughed. “They’re on swimming teams — and I used to be but that was a long time ago — I don’t want to try to compete with them. They’re going to be such faster swimmers.”

Nelson urges all Red Dragons, young and old, to find ways in which they can stay active, stay involved and find a lifetime fitness activity that’s right for them.

“I still swim laps a few times a week and I teach water aerobics a few evenings a week,” Nelson said. “I just thought the lifeguards at my pool are all young and they told me, ‘We know you can do it.’

“I’m glad they were that confident,” she laughed. “I’m pretty excited. I do think it’s important to keep doing some type of activity. My husband and I are both still pretty active. We’re in the pool, we’re riding our bikes.”