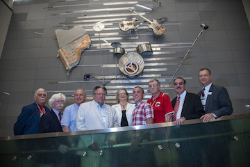 
The new, two-story wall sculpture overlooking the first floor of Corey Union features symbolic musical instruments like those played by Billy Joel, the Grateful Dead and other artists who once performed at SUNY Cortland.

The metal instruments can’t actually be played by musicians, but the entire work of art can bring music in the recently renovated venue to life visually. Embedded in the sculpture are colored spotlights programmed to blink with the flow of beats and riffs played through the sound system.

Students performing in the fall’s first Open Mike Night in the first-floor food court in Corey Union on Tuesday, Aug. 27, were the first members of the SUNY Cortland community to experience this aspect of the sculpture, which commemorates the university’s concert legacy.

The event was sponsored by the Student Activities Board. It mixed student participants with several alumni speakers involved with bringing big-name artists to campus during the 1960s, 1970s and 1980s. Alumni also displayed memorabilia and photos from those historic concerts.

“This is a unique feature for a unique sculpture that pays tribute to a unique time in musical history,” said Kevin Pristash ’85, MA ’91, director of Corey Union and Campus Activities, of the sound-responsive lights. “And it’s a fun way to raise awareness of SUNY Cortland’s role in launching the careers of some of pop music’s biggest stars.”

Throughout the 1960s through the 1980s, the list of performers that came to Cortland included Aerosmith, the Beach Boys, the Eagles, Linda Ronstadt, Simon and Garfunkel, James Taylor and many, many more. During that time, increasing student activism and leadership met the economics of the music industry, which relied on touring college campuses to promote record sales.

Former students involved with that effort came together last year to launch the SUNY Cortland Alumni Association’s Musical Legacy Commemoration (1960-90) Project, which involved a schedule of panel discussions, exhibits and events aimed at raising awareness of this era during SUNY Cortland’s sesquicentennial year.

The committee hired Scott Oldfield ’06, the artist responsible for the giant, metal red dragon in front of the SUNY Cortland Stadium Complex, to create the towering, stainless steel and copper arrangement of sculpted musical instruments in Corey Union. Oldfield talked about his creation at the recent event.

The sculpture was officially unveiled earlier this summer as part of Alumni Reunion 2019. Because of technical issues, however, the responsive lighting system was not turned on. That was done on Aug. 27, in the second unveiling event, which was aimed at students.

Open Mic Night is a bi-weekly event in Corey Union. It is free and open to the public.