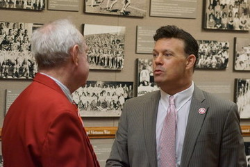 
Mike Vela ’88 has been back to the SUNY Cortland campus many times since his graduation. He’d return for Cortaca games or to catch up with his former football teammates and Pi Lambda Phi fraternity brothers.

Vela even served as tour guide a few years ago when his son, Michael Vela, was looking at colleges. The College looks much different than it did when Mike Vela arrived as a freshman in the fall of 1984. The younger Vela — currently a junior international studies major and dean’s list student at SUNY Cortland — was amazed at the new facilities on campus, including the stadium complex and the Student Life Center.

Yet the elder Vela still felt there was something missing at SUNY Cortland. The campus needed an unmistakable symbol for the Red Dragon Pride that so many of the College’s alumni feel long after graduation.

As a result, Vela has spent the past few years working with Senior Gift Officer Rich Coyne ’07 to craft that idea into the reality. Thanks to a generous gift from Vela, a 26-foot-long, smoke-breathing Red Dragon statue will rise in front of the stadium complex on Lankler Drive. SUNY Cortland will unleash the dragon during an unveiling ceremony at 11:30 a.m. on Saturday, Sept. 16 before a home football game against Hartwick College.

“First of all, I thought it was a really great idea,” Vela said. “Working with Rich, he is a genius at all this stuff. He doesn’t get enough credit for this. He thinks things through and he plans things beautifully. He and I put our heads together and we talked about having a dragon.

“I said, ‘Look, I’d like it to breathe fire so we can flash to it whenever we score.’ It can be anything, soccer, whatever we’re doing. When something goes well for the Red Dragons, have a camera flash to that dragon breathing smoke and that should rile up the fans and build some camaraderie.”

Scott Oldfield ’06, a lecturer in SUNY Cortland’s Art and Art History Department, will sculpt the statue, which is likely to become a popular icon  on campus in the years to come.

Vela, who was a business major, is executive vice president of Foresters Financial Services, Inc. in New York City. He is also an accomplished poker player, having placed first in a World Poker Tour no limit hold ‘em event at Foxwoods Resort Casino in Mashantucket, Conn. In 2007. Vela placed third in a PokerStars Championship event in the Bahamas this January.

SUNY Cortland remains important  among the transformative events in Vela’s life. Not only did the College offer him a strong business education and a series of life lessons on the football field, it also led him to find a circle of friends he’ll have for decades to come.

“I always say it was the best four years of my life,” Vela said. “It shaped me, it changed me and built me to where I am. It got me to the career I’m in now and thank God I’m able to contribute and take care of people, which is wonderful. Cortland left an unbelievable impression on me.”

Vela can’t wait to see the statue unveiled. He’ll undoubtedly be beaming as students and alumni get a glimpse of the Red Dragon sculpture for the first time and line up to take selfies to share on social media.

Vela is also proud to know that his name will live on, displayed on a plaque near the statue. He doesn’t need further recognition of his gift but Vela hopes that his monument to Red Dragon Pride will inspire other SUNY Cortland alumni to show their support for the College in whatever way they are able.