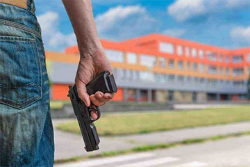 
Joel Capellán, a legal scholar who focuses on statistics and spatial analysis, will share data as he attempts to shed light on crucial, unanswered aspects of the phenomenon of mass murder by firearms, on Wednesday, Oct. 17, at SUNY Cortland.

Capellán’s talk topic aims to bridge the gap of information that has led to the inability for institutions to arrive at consensus on the cause.

“When it comes to mass public shootings, the United States is, tragically, in a class on its own,” said Capellán, an assistant professor of law and justice studies at Rowan University. From 2010 to 2014, he served as a research assistant with the U.S. Extremist Crime Database (ECDB) Project.

“There are more of these attacks in the U.S. than in any other developed country in the world, and the rate of incidence has been accelerating over time,” Capellán said. “Given the devastating and recurring nature of these events, it is surprising that criminologists have devoted very little attention to these massacres.”

According to Capellán, the gap in knowledge has been filled primarily by the media organizations, allowing the media to shape the social construction of mass murder by selecting which events become landmark narratives and therefore “typical” examples.

“The media focus on the most extreme and atypical cases has created a plethora of myths and misconceptions about who, where, how and why mass public shootings occur,” he said.

Capellán has constructed a database of mass public shootings in the United States from 1960 to 2014. This database, created from open-source materials, contains demographic information on offenders and victims, as well as incident-level data on preparation, execution and legal aftermath of the attacks.

During the talk, he will delve into the emerging empirical literature on mass public shootings. He’ll give particular attention to definitional issues, patterns, motivations and the social and psychological processes behind these attacks. Current debates on policy and strategies aimed at preventing and mitigating the lethality of mass public shootings also will be discussed.

Capellán, who earned his Ph.D. in criminal justice from the CUNY Graduate Center in 2016, has an M.A. in social science research from the University of Chicago and a B.A. from Buffalo State College, where he was honored with the SUNY Chancellor’s Award for Student Excellence. His scholarship has been supported by numerous grants and awards.

When the series continues in November, America’s abiding thirst to mete out death to those considered to be the worst criminals comes into play.

On Nov. 7, sociologist Herbert Haines will give a talk on the potential for the 70-year long, world-wide trend away from executing criminals to take a sudden U-turn. A professor in SUNY Cortland’s Sociology/Anthropology Department, Haines will present “Capital Punishment and the Rise of Right-Wing Nationalism.”

Sharon Todd, a SUNY Cortland professor of recreation, parks, and leisure studies, plans to explore how current generations, who seem to be spending less and less of their childhood outside, perceive wilderness environments, during a lecture on Feb. 27. Titled “Scared to Death? Changes in College Students’ Fear and Anxiety in Wilderness Environments Over Time,” Todd’s talk will explore changes over roughly the last 20 years in college students’ fears of the outdoors.