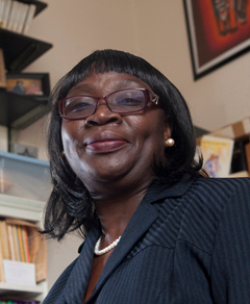 
Ibipo Johnston-Anumonwo, a professor in the College’s Geography Department, will be honored with the Chancellor’s Award for Excellence in Scholarship and Creative Activities.

She will receive the prestigious award during the 2010 Undergraduate Commencement on Saturday, May 22, in the Park Center.

Promoted to full professor in 2002, she becomes the ninth member of the SUNY Cortland faculty to receive the award, which recognizes her continually evolving and expanding research interests throughout her almost 22 years at the College.

Through her research and scholarly activities, Johnston-Anumonwo has distinguished herself in the fields of urban geography, African studies and geographic education.

A respected scholar and authority in the field, Johnston-Anumonwo’s accomplishments and contributions to the profession encompass gender, race, transportation and urban employment issues; gender and development; and multiculturalism. She considers these themes to be closely interrelated and often takes an interdisciplinary approach in her research activities. She makes a point of applying her research to her teaching.

“She is particularly well known for her research on gender and ethnic disparities in commuting patterns observed in urbanized communities across the United States,” said Florence M. Margai, associate professor and graduate director in the Geography Department at Binghamton University.

Through her detailed analyses on the topic, Johnston-Anumonwo has brought to this research increasing sophistication by integrating issues of workplace location and comparative analysis of multiple urban settings following for example, both the publication of her article “Gender, Race and Employment Access in Buffalo, New York,” in 1995, and a research study funded by the U.S. Department of Transportation in 1996.

“Professor Johnston-Anumonwo’s work has made valuable contributions to geography, as well as to closely aligned disciplines with concerns for the changing social composition of America’s workforce and its urban and suburban environments,” said Elvin K. Wyly of the University of British Columbia. “Her work is quantitatively sophisticated, theoretically rigorous, empirically rich and crafted with a judicious eye towards the balance between basic theory and the need for relevance in applied public policy.”

In addition to co-authoring and co-editing four books, Johnston-Anumonwo has contributed nine chapters in published books that often serve as texts for classroom discussion both on and off the SUNY Cortland campus. A dynamic and popular speaker, and recipient of numerous travel grants, she has made more than 54 presentations at statewide, national and international conferences on topics ranging from gender and ethnicity, to human geography and geographic education. Her published work, which, according to John Frazier of Binghamton University, “appears in the best journals in her discipline,” has received more than 150 citations by other researchers in the field.

“Ibipo is an active researcher, but she is also an active research interpreter” states Donald Ziegler, past chair of The College Board’s AP Human Geography Development Committee. “Her article linking the journey to work with occupational sex segregation is, along with the work of Susan Hanson, the definitive work that demonstrates the importance of considering daily travel and transportation in understanding the broad and persistent patterns of sex segregation in the American workforce,” said Wyly.

“Dr. Johnston-Anumonwo sustains a high level of quality scholarship on critical national and international issues, disseminates her work in important outlets and is recognized for her valuable contributions by key scholarly groups,” said Janice Monk, professor of Geography and Development and Research Social Scientist Emerita of Women’s Studies at the University of Arizona.

Johnston-Anumonwo joined the SUNY Cortland faculty in 1988 as assistant professor, and was promoted to associate professor in 1994. She served as interim co-chair of the Geography Department in January-August 2002, and as acting chair in Summer 2003.

She holds a B.Ed. in teacher education from the University of Ibadan, Nigeria, and an Ed.M. with a concentration in international development from Harvard Graduate School of Education. She was awarded a Ph.D. from Clark University, Worcester Massachusetts where her dissertation study focused on “A Geographic Perspective on Occupational Segregation.”

Johnston-Anumonwo has contributed her professional expertise to the community as a member of the Cortland YWCA, Zonta and the Syracuse Jack and Jill Organization. She is married to Justus and resides in Cortland, N.Y., with her two children, Obi and Kachi.