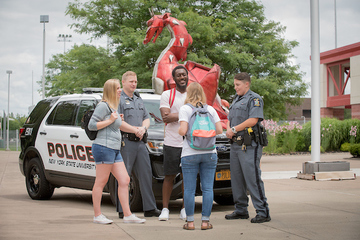 
The SUNY Cortland campus is the safest college environment in New York state, according to a new report.

SUNY Cortland was the top-ranked college in the state.

“It is truly gratifying to be recognized for something that we’ve long known to be true: SUNY Cortland is one of the safest, healthiest and most supportive educational environments students and parents could ask for,” President Erik J. Bitterbaum said. “I am grateful to the many campus professionals, and for our students themselves, for making SUNY Cortland such a special place.

The study calculated those four factors based on every 1,000 students, females or residents in each location. Reported hate crimes, instances of violence against women and violent crime were weighted to represent 90 percent of the final score.

Public, private and non-profit colleges that offer two- and four-year degrees with at least 5,000 students were considered in the report.

SUNY Cortland’s University Police Department moved into a state-of-the-art facility in Whitaker Hall in 2017. The department’s uniformed officers monitor activity on campus on foot, on bike and in patrol cars and use an extensive video surveillance network. The College’s 27 emergency blue light phones allow students to quickly and easily report emergencies or suspicious activity 24 hours a day.

The College’s Title IX Office works to raise awareness about sexual harassment, sexual assault and sexual violence as well as offer training to students, faculty and staff on how to identify and prevent domestic violence, dating violence and stalking.