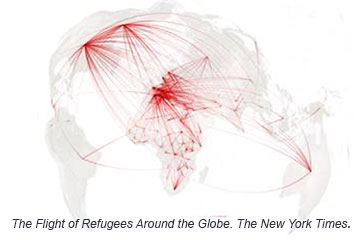 
Last year, more than 82.4 million people — one out of every 95 people on the planet — were living as refugees after fleeing war, violence, persecution, economic turmoil and disaster, according to the United Nations High Commissioner for Refugees. That number has doubled over the last 20 years as part of a global humanitarian displacement crisis that shows little sign of slowing.

Members of the SUNY Cortland community have an opportunity to gain a better understanding of the human beings behind the staggering numbers during a simulation titled “On the Move: Populations in Crisis” planned for Wednesday, Oct. 13 and Thursday, Oct. 14 in the Student Life Center.

The hour-and-a-half simulation — offered once Wednesday and twice Thursday — introduces participants to some of the world’s ongoing refugee crises by leading participants through stations representing common refugee experiences. It ends with an open discussion.

The goal is to create an interactive learning environment open to the campus community, said Carrick-Hagenbarth, an assistant professor of economics who is co-leading the event with her mother, Pat Carrick, vice president of the U.S. board of directors of Doctors Without Borders/Medecins Sans Frontieres USA.

“For many of us, the plight of refugees and displaced people can seem very distant to our own lives,” Carrick-Hagenbarth said. “Our main experience with the issue may be via news media, which paints an incomplete and often negative picture of people seeking safety. This refugee simulation is meant to provide the space for people to recognize the humanity of refugees, their potential and capabilities, and to provide a means for people to connect physically and emotionally to the topic.”

Pat Carrick is a humanitarian health care worker, most recently with the International Rescue Committee assisting Afghan refugees entering into the United States. Although the plight of Afghan refugees has recently dominated U.S. headlines, displaced people are also fleeing danger from Ethiopia, Syria, Haiti, Venezuela, Yemen, the Central African Republic many other countries around the globe.  This is both a logistical challenge and a humanitarian crisis.

Pat Carrick visited SUNY Cortland in March 2019 to talk about her work with Doctors Without Borders, a medical humanitarian aid organization that responds to millions of patients around the world every year. Carrick spent 30 years working in acute care hospital nursing and home-based hospice services as well as in community health centers that provided care to under-served populations in her home state of Montana. She then served as medical team leader at an Ebola treatment center in Sierra Leone in 2015. She previously traveled to Malawi for HIV-related work in 2007 and to South Sudan in 2010 to combat malnutrition. As the director of the board of directors for Doctors Without Borders (MSF), she assisted in Ebola hot zones, HIV/AIDS-ravaged communities and conflict-torn countries on the verge of famine.

Given Carrick’s extensive background as a medical field worker, the simulation will include a discussion of the medical implications facing refugees. Participants will see how malnutrition is identified and measured. Also, Carrick will discuss the careful planning and requirements needed to transport and store medications, including vaccines, in remote areas and at refugee camps located in extreme heat conditions.

Carrick-Hagenbarth is an economist who studies economic development in Latin America. Her work has focused on the experiences of rural landless workers in Brazil. Additionally, she has volunteered with the United Nations High Commission for Refugees (UNHCR) in Ecuador assisting Colombian asylum seekers.

Three sessions will be offered in the Student Life Center multipurpose activity court: