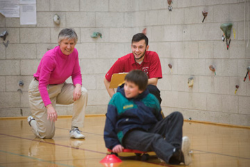 
When the nation’s top public health agency needed a go-to expert on physical activity for young children, it turned to a renowned SUNY Cortland professor of physical education.

Diane Craft ’72 has served since last spring as the subject matter expert on early childhood physical activity for the Centers for Disease Control and Prevention (CDC). It’s a temporary intergovernmental personnel agreement (IPA) appointment that involves providing advice and training to individual state departments of health. And based on the interest from those departments, Craft’s work has been beneficial, leading the CDC to recently reenlist her services for a second year.

“This is basically an invitation to states to promote early childhood physical activity,” said Craft, a national expert in developing inclusive physical activities for toddlers and preschool-aged children. “We talk about what they’re doing now, we ask different questions, and we consider what they might look to do in the future.”

So far, Craft has consulted with more than 30 states through conference calls and has travelled to 15 of them — from Maine to California — for on-site visits. The work was necessitated by State Public Health Actions 1305, a source of federal funding that requires state health departments to create policies and programs promoting early childhood physical activity along with several other disease prevention efforts.

“The CDC felt that if it’s adding this requirement for the 1305 grant, there should be assistance available when states contact them,” said Craft, who has co-authored four books on physical activity for preschool students.

Some states opt only for a technical assistance conference call or webinar while others request a visit from Craft for a more personal consultation. This meeting can take several different forms, although it most commonly includes a meeting of statewide stakeholders whose work impacts the early childhood population — that is to say, pre-kindergarten age children from birth to five years old.

“Unlike schools where the organizational structure is pretty straightforward, there are a plethora of agencies and organizations that impact early childhood, making it the Wild West in a way,” said Craft, noting that on-site visits usually include a “train the trainer” workshop for groups that work with childcare providers or a less-common workshop for childcare providers themselves.

When it comes to making physical activity recommendations for individual states, she often shares “best practice” examples from across the country. Craft said Colorado has the lowest obesity rate of any state. Among their many efforts are new unified public messages developed by the state health department based on input from various agencies. North Carolina is unique in that it operates a sustainable infrastructure supporting early childhood physical activity. The state’s “Be Active Kids” program, funded by the BlueCross BlueShield of North Carolina Foundation, provides ongoing training and a physical activity curriculum for trainers to share with childcare providers in the field.

Providing ample “Tummy time” — the amount of time an infant spends awake and alert on his or her stomach — is essential, Craft said. With toddlers, the recommendation is at least 60 to 90 minutes of moderate to vigorous physical activity each day, according to the third edition of Caring for Children, standards endorsed by the CDC.

“I really push for the quality of movement as well as the quantity,” said Craft, who started collaborating with New York State Department of Health officials a decade before her recent appointment with the CDC began. “Children need to develop fundamental motor skills … They need to become more proficient movers if they’re going to continue to be active throughout their lifetime.”

After working through a sabbatical leave this past year, Craft will begin phased retirement at SUNY Cortland in the fall — teaching half-time and working for the CDC quarter-time during the upcoming academic year. Her association with the College goes back over 45 years, and she returned to Cortland to teach in the mid 1980s after earning a doctoral degree in adapted physical education from New York University.

She credits the innovative adapted physical education work at the College with informing her recommendations for early childhood physical activity.

“It’s so important that we in physical education — especially elementary physical education — give children lots of practice to develop those mature fundamental movement skills that will set them up for a lifetime of enjoyable physical activity,” she said. “My conviction is only strengthened by seeing what’s going on across the country.”