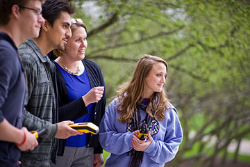 
Drone technology is already helping SUNY Cortland educate the next generation of geographers, sociologists and entrepreneurs. If all goes as planned, the College may also use it to help lift the economic fortunes of the region.

But they also seek to develop applications for drones that could foster new business enterprises that will create local jobs or support existing area businesses attempting to expand and thrive.

So in early spring the College joined the NUAIR Alliance, a New York based not-for-profit coalition of more than 100 private and public entities and academic institutions. The members work together to operate and oversee drone test ranges in New York, Massachusetts and Michigan.

And recently College officials have proposed partnerships with other local colleges to create an institute that would develop practical, marketable uses for drone technology.

The collaboration is among a host of different projects proposed as part of the Cortland community’s $10 million economic revitalization grant application to New York state.

When the New York Regional Development Grant opportunity popped up, Wendy Miller, associate professor and chair of the College’s Geography Department, discussed the potential with David Duryea, vice president for finance and management.  Duryea then worked with the City of Cortland to have a broad description about the drone technology institute proposal included in the application.

“There’s been a lot of talk about making the central New York area a drone hub for the United States with the NUAIR Alliance and with some their other partners as well,” Miller explained. “The technology is really growing and its use is just going to expand almost exponentially over the years because it could be used for so many different things. We decided, ‘Hey, there’s this potential with the economic opportunity funds that this is something we could do.’”

Duryea suggested that, for example, future SUNY Cortland graduates could decide to start a new company in Cortland using the Startup NY program.

“We could work with our economics department faculty to help them with their business plan, our geography faculty to help with the technical side of things, and this whole NUAIR Alliance partnership would be not far away in Utica with an office in downtown Syracuse,” he said.

“What we have to offer are students who could get involved in other startup companies in the Alliance, eager young students ready to help with GIS and business assistance.”

“We’re trying to get our students the best exposure to the technology so they’re ready for the workforce," Miller said. “You want to get the student working in the lab thinking ‘This is what I want to do.’ We want to expose them to that ‘light-bulb’ moment. What we hope for is that this might be the one class that lights them up.”

“I hope the partnership can provide opportunities and experiences for our students to learn about Unmanned Aircraft Systems,” she said “These real-world experiences are invaluable to them as they are entering the workforce.”

Headquartered at Griffiss International Airport in Rome, N.Y., NUAIR manages one of just seven FAA-designated drone test sites in the U.S. leading research and deployment technologies that establish the case for safe UAS operations in the National Aerospace System.

NUAIR, which supports the drone and sensor industry in the region, is led by three different economic development agencies. CenterState Corporation for Economic Opportunity (CEO) is an organization of 2,000 companies that work together to increase business competitiveness, community prosperity and regional growth in a 12-county region of New York state. Mohawk Valley Edge serves Oneida and Herkimer Counties. MassDevelopment supports the Commonwealth of Massachusetts.

The alliance offers periodic meetings at which faculty, students and administrators can network and share ideas.

About one year ago, Scott Anderson, professor of geography, and Duryea paid a visit to the Griffiss complex to see the technology demonstrated.

“As I look at it, the commercial drone industry is growing by leaps and bounds,” said Duryea, who also serves as operations manager for the College’s Research and Sponsored Programs Office.

“New York state, through the Governor’s Office, is one of the places taking the lead in this technology development in America. We’re trying to get our students involved in this tremendous growth industry. Joining the NUAIR Alliance will allow us access to all the other private companies, public companies and educational institutions to collaborate on future projects.”

The alliance would be a natural fit for the Geography Department, which for decades has trained its students to use GIS computer software to study all kinds of data by plugging it into a map. Every year, student interns assist local governments and other organizations to map their important data.

This fall, the Geography Department will welcome a new faculty member to lead research involving drone technology, Christopher Badurek, whose background is in private industry as well as the faculty of Appalachian State College. SUNY Cortland continues to operate one of the few baccalaureate degree-granting programs for GIS in the SUNY system.

Joining the alliance could help future GIS majors analyze data gathered from high-flying drones using technology developed by the military called Light Detection and Ranging (LIDAR) technology. In plain language, LIDAR is like a camera that’s much better because it can look under things and can capture images in as variety of ways.

“With LIDAR, you can see what’s underneath the tree canopy and what’s on the ground,” Miller said.

The sensors and cameras installed on drones could be used to analyze the condition of a golf course, to study the evolution of a stream or river, to locate an historical site buried under vegetation or to plan a search-and-rescue operation for a missing person.

To purchase a high quality, LIDAR-equipped drone would cost the College around $100,000, Miller noted.

Meanwhile, the institution hopes to link up with partners in need of GIS services such as data analysis.

SUNY Cortland students already have begun working with the precise optical and infrared data collected by others.

For example, SUNY Cortland students including GIS majors conducting research under anthropology and sociology adjunct professor John Sheehan are working on a project to look down upon the fields at the Gettysburg battle sites from the various overlooks used by the Civil War commanders who oversaw that infamous bloodbath, said Anderson.

“Some of the generals were judged very harshly,” said Anderson, who was among a small College contingent to visit the NUAIR Alliance facilities at Griffiss. “John is actually working hard to reassess the battlefield reputation of a much-maligned Gen. Daniel Sickles. He’s using information that the general would have had at the time and LIDAR data provided by the State of Pennsylvania to rebuild the battlefield.”

In theory, future classes could create reports that would help landowners locate remote property boundaries, loggers and farmers identify the makeup of a forest or field, or academics find antiquities long buried by the changing natural landscape. Any of these applications might become the basis for a commercial enterprise, or they could dream up another purpose they might use to launch a new company in Cortland County.

“What it’s been doing in fields like archeology is astonishing,” Anderson said. “You can go to the Amazon or places like Belize, and fly a LIDAR over it to find old Mayan ruins in moments that would take years and decades to find with a machete and burro.”

“GIS is the kind of non-sexy side, analyzing the data from the drones,” Miller said. “That’s kind of the back end of it but then there’s having students learn about communicating about what it all means. That’s a skill that we also can provide. It could give the students a good leg up to get jobs.”