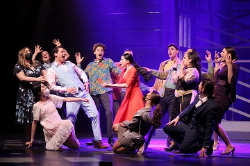 The high-energy, laugh-filled show opened last weekend. It will run Thursday, April 7, to Saturday, April 9 at 7:30 p.m. and Sunday, April 10, at 2 p.m. in the Dowd Fine Arts Center Theatre. Tickets can be purchased online.

“SUNY Cortland’s ‘Company’ is an exploration of relationships and marriage through a contemporary lens,” said Performing Arts Professor Kevin Halpin, director and choreographer of the production. “Full of humor, insight, song and dance, this talented cast takes you on a roller-coaster of emotions through the world of love and relationships. This is a show you will love from top to bottom.”

“Company” was the first Broadway musical to not have a linear plot. Instead, a series of songs and vignettes focus on relationships, specifically marriage, as seen through the eyes of a single 35-year-old. The original Broadway production was nominated for a record-breaking 14 Tony Awards and won four, including Best Musical. The production focused on “Bobby,” a man navigating the world of relationships in 1970s New York City.

The Cortland production is set in a contemporary time frame and, like the current Broadway revival, has a female “Bobbie” lead. It broadens the idea of marriage and relationships with a more inclusive 2022 lens. However, the score still includes classic Sondheim songs, including The Little Things You Do Together, The Ladies Who Lunch, Getting Married Today and Being Alive.

The Cortland cast features students from the musical theatre program, including first-year through fourth-year students:

The musical contains portrayals of physical romantic intimacy, so parents may want to consider that before bringing younger family members.