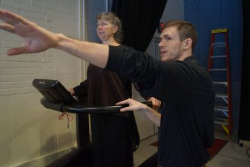 
A SUNY Cortland research team is continuing its innovative work to improve the lives of people with Parkinson’s disease through hard exercise lasting less than a minute.

The progressive motor disease affects more than two million Americans with symptoms such as shaking hands, a shuffling walk or soft speech. However, after the exercise prescribed by the SUNY Cortland team, study participants with Parkinson’s improved their balance and gait, making them less likely to fall compared to when they started the program.

The research project, which launched in 2016 and involves collaboration between the College’s Kinesiology and Communication Sciences and Disorders departments, relies on two exercise machines developed with Olympic mogul skiers in mind. It’s equipment that provides a high-intensity, low-impact workout for the lower body.

“We’re trying to do something different in the area of Parkinson’s work,” said Professor of Kinesiology Jeffrey Bauer, the project’s principal investigator. “We know that exercise helps, but what we’re trying to do is reduce the time required for people to exercise and still see a measurable benefit from it.”

Bauer explained that Parkinson’s patients are affected by a deficiency of dopamine, a compound that functions as a crucial transmitter of neurological information.

“Without dopamine synthesis — without dopamine being created or accepted in our body — the neurological messages sent from the brain to the muscles just don’t work,” he said. “Doctors can prescribe medication, but we also know that exercise itself increases the body’s ability to accept and use dopamine correctly.”

An open house-style event in the Professional Studies Building’s biomechanics lab on April 6 invited study participants, student researchers and members of the public to learn more about the research findings to date. So far, seven people with Parkinson’s who range in age from their mid 40s to early 80s have participated in the project.

When the study launched, participants exercised on a piece of equipment known as the QuadMill. They would balance in a squatting position on a forward-moving platform. SUNY Cortland has since acquired a machine known as the ReACT system, which Bauer likened to a smoother, more advanced version of the QuadMill.

The study involved a 12-week training regimen of two training sessions per week. During each session, participants would ride the equipment three times for 45 seconds each. Researchers recorded biomechanical data such as gait and balance, physiological information such as blood pressure and heart rate and psychological responses about feelings and emotions. Speech data also was acquired at the beginning, in the middle and at end of the study.

“What we’re seeing is a measurable effect that not only transfers over the course of a single day, but several weeks,” said Bauer, whose 87-year-old father has Parkinson’s disease.

He noted that several different measurements all point to the positive effects of high-intensity exercise. Cadence, which measures how fast a person walks, increased. One participant’s balance sway area decreased by approximately 50 percent, suggesting a lower likelihood of falling. Participants have noticed their quality of life improve.

“The first thing I noticed is that I was singing along to songs on the way home from sessions,” said Karen Cretaro, a 64-year-old research study participant from Syracuse, N.Y.

Cretaro was diagnosed with Parkinson’s a year and a half ago, despite leading an active lifestyle in fitness and martial arts. She discovered SUNY Cortland’s research project through a trial finder tool created by the Michael J. Fox Foundation, founded by the popular actor who used his public struggle to raise awareness about the disease.

Medication helped Cretaro and so has the exercise. She started riding the College’s equipment at 20 revolutions per minute and steadily built up to 60, with the encouragement of SUNY Cortland students assisting on the project.

“The students are very supportive,” Cretaro said. “I wanted to keep moving up because I’m used to pushing it, and they make it feel like a workout.”

A.J. Generali ’15, M ’17 has been involved with the project since it launched, when he began pursuing his master’s degree in exercise science. Besides getting to work with new equipment, Generali said he has enjoyed witnessing the steady progress of study patients. They have continued returning to SUNY Cortland’s biomechanics lab even after the 12-week testing ended.

“This is the type of stuff you do outside of your normal everyday work that’s fulfilling and worthwhile,” said Generali, who now serves as a lab instructor in the Kinesiology Department. “And not only are our subjects enjoying it, but students are enjoying it too.

“They’re seeing this other path they can go down within our major.”

Olivia Trumino, a senior exercise science major from Binghamton, N.Y., has aspirations to become a physical therapist, so she saw the student research opportunity as valuable experience in a clinical setting.

“It’s been better than I ever could have imagined — the highlight of my semester,” Trumino said.

And the SUNY Cortland team’s work isn’t done. The group will seek additional data through electromyography, a procedure to assess the health of muscles and the nerve cells that control them, as well as ultrasound to consider what is taking place inside the body. Pressure map technology also will be incorporated to gain more detailed information about balance and movement in a more constricted everyday space such as a kitchen.

Eventually, the group hopes to publish its results and share them with the scientific community.

“We’re going to gather more information about Parkinson’s so that we can help,” he said. “We know we’re not going to cure Parkinson’s. But science can be used to make people’s lives better, and that’s what we’re trying to do.”