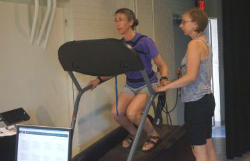 
SUNY Cortland Professor of Kinesiology Jeffrey Bauer knows what Parkinson’s disease looks like: shaking hands, a shuffling walk, soft speech. He sees the symptoms in his 85-year-old father, who was diagnosed with the progressive movement disorder five years ago.

So it’s for both personal and professional reasons that he’s leading a research team comprising four colleagues and assisted by several SUNY Cortland students. They’re not focused on finding a cure for the disease, which affects more than one million Americans. Instead, they’re looking to improve the quality of life for people with Parkinson’s disease in an innovative and active way.

“We know we’re not going to ‘fix’ people completely,” said Bauer, the project’s principal investigator. “Through application of our understanding of movement science, we’re seeking to temporarily reduce or remove the physical symptoms of the disease.

“We’re trying to maintain functional capability for as long as possible with the hope that one day a cure can be found.”

The project tests people with young onset Parkinson’s, ranging in age from 21 to 50 years old, on an elliptical-type machine known as the QuadMill. Initially designed for Olympic mogul skiers to perform high-intensity, low impact training, the machine targets the lower body.

Many researchers have prescribed exercise as a way to improve life with the disease. In most instances, however, recommendations such as two hours at the gym or a 20-mile bike ride prove unreasonable in both their time commitments and feasibility for an older population, Bauer explained. Enter the QuadMill, a moving platform that users balance on in a squatting position. It offers lower body strength and conditioning benefits in a fraction of the time required by traditional methods.

The new research also blends the study of biomechanics and speech pathology, relying on collaboration between two departments within the College’s School of Professional Studies.

“It’s great collaboration,” said Irena Vincent, an associate professor of communication sciences and disorders, who is collecting data on speech and voice while supervising the project with Bauer. “Our students are phenomenal, and the participants are just incredible.” 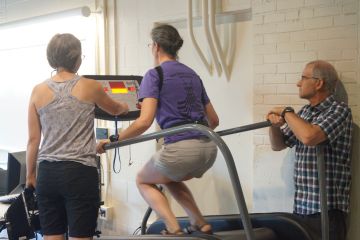 Parkinson’s, an incurable degenerative disease of the nervous system, frequently causes speech and swallowing problems along with physical movement issues.

Kindra Bell was diagnosed with Parkinson’s in March. The Ithaca, N.Y., resident discovered SUNY Cortland’s research project through a trial finder tool created by the Michael J. Fox Foundation, a non-profit organization devoted to finding effective therapies and cures that was created by the popular actor who used his public struggle with the disease to raise awareness. Bell traveled to Cortland twice a week during a six-week trial.

She still returns to use the machine regularly even though the initial study ended.

“I would do more if you let me do more,” she told researchers while riding the QuadMill recently in the College’s biomechanics lab.

“Really, it’s been fantastic,” Bell said. “I see (Bauer and Vincent) twice per week and I’ve seen a neurologist only three times … They’re almost like my healthcare team.”

The training system also boosts confidence and mental health without prescription drugs. Besides the slow deterioration of motor skills, Parkinson’s decreases the flexibility of the vocal folds, which makes it more difficult to speak. This struggle can lead to social withdrawal and eventually depression in some cases.

“It’s empowering because people can do something to help themselves,” Bauer said.

For Bauer and Vincent, the project also fulfills a goal they set several years ago to lead meaningful, life-changing research together. Bauer served as Vincent’s faculty mentor when she arrived at SUNY Cortland in 2007. A colleague and study participant from a nearby college also played a key role in jumpstarting the research.

Bryan Roberts, the associate dean of Ithaca College’s Park School of Communications, was diagnosed with Parkinson’s six years ago. Today, he also works as a passionate advocate on the Michael J. Fox Foundation Board of Directors. Roberts connected with the Cortland research team after Bauer read about a 2015 keynote talk he delivered for ARISE, a Syracuse-based nonprofit that serves people with disabilities.

“I think the work that Dr. Bauer and Dr. Vincent are doing is on the vanguard of Parkinson’s disease research,” said Roberts, 36, a former collegiate baseball player who remains active in sports and still works long hours each week. “It’s the kind of work that can impact people immediately, and that’s what we value at the Fox Foundation.

“There’s a head and a heart behind it. That’s the cornerstone for good scientific inquiry.”

The project also brought in the expertise of other SUNY Cortland kinesiology colleagues: Philip Buckenmeyer, associate professor and chair; Erik Lind, an associate professor; and Mark Sutherlin, assistant professor. The work also attracted the interests of both undergraduate and graduate student researchers.

“We talk about these opportunities all of the time in our classes,” Bauer said. “We try to create opportunities that are more meaningful than just sitting in a classroom.”

The research team hopes to test more Parkinson’s patients on the QuadMill and gather additional data on its biomechanical, speech and psychological effects. Its overall goal is to maintain or improve the patients’ quality of life. Eventually, the machine, first tested as a possible Parkinson’s therapy at SUNY Cortland, could be seen as a widely accepted treatment for the disease.

“There are problems out there that can’t be fixed individually,” Bauer said. “But there are probably tools out there and other people who can help. And if we can bring them together, then we should.

“We should try to help people with our research, and this is a way I think we can do it.”