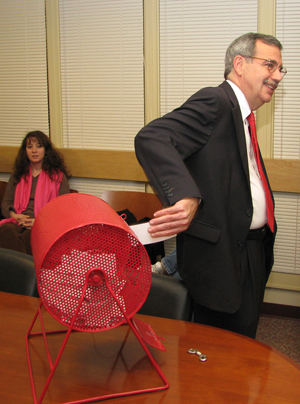 The prize includes two tickets to the Super Bowl at Lucas Oil Stadium in Indianapolis, Ind., this February, as well as hotel accommodations and $1,000 to offset travel expenses. The deluxe package is worth $3,837.

One of the most decorated student-athletes in SUNY Cortland’s history, Breen, 76, earned national and international prominence as a swimmer. He won four Olympic medals (one silver and three bronze) and set four world records in the swimming pool during his career. He was a three-time All-American at SUNY Cortland and a 1969 C-Club Hall of Fame inductee.

His most recent high-profile prize came after College President Erik J. Bitterbaum drew his name on one ticket from a drum containing the 216 raffle entries.

“Get out of here,” Breen said to the pair. “You’re kidding me. This morning, I said to myself: ‘What the heck would that be like?’”

Breen, who has played the College’s Super Bowl raffle in each of the three years of its existence, said he likely will ask his wife, Caroline, to attend professional football’s biggest game with his other ticket. He said he is not loyal to a particular team but that he will monitor the National Football League (NFL) season closely during its postseason.

“Honestly, this is the first time I’ve won something since my name was pulled for a Polaroid camera in the 1960s,” Breen said.

The College acquired the Super Bowl tickets through its close ties with the NFL’s New York Jets, which used the SUNY Cortland campus as its official training camp site in 2009 and 2010. Although the NFL lockout forced the Jets to hold training camp in New Jersey this summer, the team plans to return in 2012, 2013 and possibly beyond that.

Raffle tickets for the Super Bowl package were sold at $100 apiece.

“I am so happy for George and I am very grateful to all of those who purchased tickets for a chance to attend this once-in-a-lifetime event,” said Franco. “This year we raised nearly $20,000 and will be able to use the proceeds to support scholarships, the arts, and alumni and civic engagement programs.”

“The Super Bowl raffle has proven to be a terrific fundraiser for the Cortland College Foundation and the College,” Franco added. “It’s a unique resource provided by our partner, the New York Jets, and it allows us to focus entirely on SUNY Cortland’s most precious resource: our students.”

Bob Kashdin, an accountant from the firm of Port, Kashdin and McSherry, audited the entire raffle proceedings. He observed the drawing in the Brockway Hall second floor conference room, attended by a small gathering of onlookers.