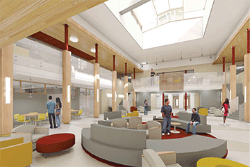 
The renovation story of SUNY Cortland’s 66-year-old Moffett Center is a little bit like the tale of Cinderalla.

But only if you imagine that the fairy godmother gave her glass slippers and a fancy dress, but ran out of magic before she got to the fancy hairdo and gleaming pumpkin carriage.

The final phase of the transformation of Moffett from an outdated gym facility into a cutting-edge academic building is now underway, after slumbering like an enchanted princess through seven years of state fiscal austerity.

By Fall 2020, most of Moffett’s ground-level space is expected to reopen, with its mid-20th-century gymnasium replaced with a contemporary-looking learning environment, complete with students lounging between classes in a newly skylighted forum space.

Construction will Have Campus Impact

As usual, the project team will do its best to avoid disrupting the campus during the year-and-a-half long renovation schedule.

“At present our office is all-hands-on-deck working on the surge plan,” Young said.

When students return from winter break in late January, they will see the entire Mathematics Department offices housed in three modular units and a campus-owned house at 29 Broadway Street.

The Health Department classrooms, laboratory and offices temporarily will occupy the space in the Cornish-Van Hoesen Complex that was vacated not long ago by the University Police Department. During the interim, a triple-wide modular facility will provide the department with additional office space.

A double-wide modular building next to Sperry Center will provide two additional classrooms as well as overflow space.

Meanwhile, in order to keep all the faculty, staff and student relocations on the main campus, the second and third floors of Corey Union will be made into classrooms.

The campus community will see the entire green space in front of Moffett Center taken over for the construction company’s staging area and contractor parking space, with some excess project-related parking overflowing into the Route 281 parking lot.

“We’re excited about that day when we can reopen the entire Moffett Center with the show-case quality space our campus community deserves,” said Erik J. Bitterbaum, SUNY Cortland’s president. “We ask for everyone’s patience with any disruption that might come about during the process.”

But it will be Worth the Wait

Most of Moffett Center looks much as it did in 1953, when the facility was constructed as the College’s first permanent gymnasium edifice. It was called the Health, Physical Education and Recreation (HPHR), and named in 1967 for the College’s fifth president, Donovan C. Moffett (1959-63).

Phase I of the Moffett Center update was completed in 2009. It renovated 20,000 square feet of main level space encompassing the pool area and back wall facing Sperry Center into modern classrooms, offices and lounge area for the Sociology/Anthropology Department, according to Dillon Young, associate facilities program coordinator, who is managing the project for the College’s Facilities Planning, Design and Construction Office.

A second phase was designed in 2011 by Holt Architects of Ithaca, N.Y. Then, the economic recession ground progress on the renovation to a halt, according to Young. New York state only recently released funds to carry out the remaining updating.

The planned, $25 million renovation inside the stately red brick building will replace the high-school ambience of narrow, 1950s-era tiled hallways with an inviting and well-lit learning environment for future classes. The mathematics and health departments will return to their former building while the economics, political science and Africana studies departments will relocate from Old Main once the upgrade is finished. The Institute for Civic Engagement also will move to Moffett Center, where it is expected to gain higher visibility.

A large, new skylight in the former gym area will look down on a two-floor high lounge area and will serve to partially illuminate faculty offices and classrooms that will be built flanking the forum space. By planning for sunshine to pour through skylights and into a glass-topped office, the College will maximize natural illumination and use less electricity, Young noted.

“A lot has changed in these seven years,” Young said of the long wait to restart the project. “These departments have evolved and expanded, but their overall requirements have stayed the same as far as office space needs for participating professors, adjuncts and support staff. We were able to increase the number of classrooms by maximizing the forum space.”

At 3,400 square feet, the forum space encompassing a portion of the former gym will be roomy enough for campus tours by prospective student groups and will feature at one end a mezzanine-level computer laboratory space for the Economics Department. The new mezzanine area also will include classrooms, faculty offices and a conference room.

Moffett’s basement level, housing the Psychology Department and the United University Professions office, will undergo minor updates in the form of improved and expanded restrooms and the remodeling of the UUP office space.

Phase II also will see the expansion of the heating, ventilation and air conditioning system to make Moffett Center one of the few air-conditioned academic buildings on campus. The work will add the fire protection sprinkler system to all renovated areas.

Moffett Center served its original purpose well for decades. The construction of the Park Center in 1973 removed much need for Moffett Center to provide the athletics, physical education and recreation building space on the campus. Furthermore, the opening of the Student Life Center in 2015 created a centralized place for the general student population to pursue recreation and leisure-time fitness, including a much larger, modern gym space. Moffett’s swimming pool was filled in during Phase I of construction, leaving only the large, central wood-floored gymnasium and handball courts as a reminder of the building’s original purpose.