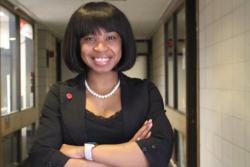 
Track and field champion Taylor Hunter couldn’t consider “running” for president of SUNY Cortland’s Student Government Association (SGA) until she thought of the big things she might accomplish on behalf of her classmates.

A junior sport management major with a minor in sport studies from Buffalo, N.Y., in addition to her new role to which she was elected on April 23, Hunter is an All-American athlete and SUNYAC champion in track and field.

“I was inspired to run for SGA president because I felt that I could make positive changes in the SUNY Cortland atmosphere,” Hunter said. “Also, I want to make sure that all students have a voice on campus.”

In the coming academic year, she will manage the day-to-day operations of the executive branch. She looks forward to serving students this school year and hopes that this is the most productive year yet for SGA.

“There were some obstacles on campus I faced but I used them as stepping-stones to reach my goals,” she said.

The SGA welcomed other officers elected by the student body for the 2021-2022 school year. The SGA executive board includes the president, vice president and chief financial advisor.

Melissa Alvisi, the newly elected chief financial officer, is a student from Latina, Italy who is currently residing in Cortland, N.Y.

She will chair the Financial Board and oversees all student government finances, expenditures and requests by all SGA clubs.

“I advise students that want to become involved to make time for new opportunities and never give up on what you love to do,” said Alvisi, an international studies major with minors in economics and political science.

“This is the mindset I have had, and I swear by, and by doing so, I have always achieved anything I aimed to do,” she said.

A special election for vice president within the SGA senate will occur during the fall 2021 semester.

Students interested in joining SGA may apply through Cortland Connect by Thursday, May 6.

The senate is comprised of senators and club representatives. After soliciting student concerns and consulting with the senate, decisions are taken to ensure academic freedom and the welfare of the student body.