Superintendent of the Year to Talk Leadership 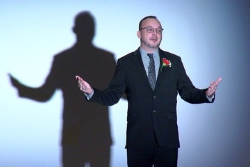 
The people in the Palmyra-Macedon (N.Y.) Central School District community like Ike.

Ike has guided the Pal-Mac district since 2007 after previously working as a social studies teacher and middle school principal in other districts. Under his leadership, Pal-Mac has seen its graduation rate rise by 11 percent and has expanded access to work-based experiences for seniors.

Ike will return to the SUNY Cortland campus to deliver a talk, “Leadership for a Change,” at 7 p.m. on Thursday, Nov. 1, in Sperry Center, Room 105. The event is free and open to the public and is the first in a SUNY Cortland Sesquicentennial lecture series co-sponsored by the School of Education.

“One thing that characterizes Bob’s superintendency is his passion for the school district,” said Chris Manaseri, assistant professor in the Foundations and Social Advocacy Department. “It was really clear to me, it’s almost palpable, that he loves the place and the people there love him. He stood in front of the high school student body, spoke extemporaneously and informally with them about what an honor it was to be selected as New York state’s superintendent of the year.

“It was clear that those students knew who Dr. Ike was. He’s not some abstract, political entity. He’s somebody who dresses up as Clifford the Big Red Dog and reads to the elementary school kids. He’s totally invested in this role.”

Ike completed his undergraduate studies at SUNY Oswego and has a doctorate in educational administration from Seton Hall University. He started his career as a middle school social studies teacher at Romulus (N.Y.) Central School before becoming principal at Newfield (N.Y.) Middle School. The School Administrators Association of New York State and the National Association of Secondary School Principals named Ike the Middle School Principal of the Year in 2004.

Innovation is key to Ike’s leadership practices. He encourages staff and students to take risks and shake off the paralysis that often comes with change. For example, the Pal-Mac district has equipped each student with a digital device for extended learning and installed WiFi on buses. Students can complete homework on their commute to and from school as well as travel to athletic and other extracurricular events.

As far as being named Superintendent of the Year, Ike credits the district’s teachers and students for being open-minded to change.

“I was thrilled and also humbled,” he said. “I think it really is a testament to the school district. Being nominated by the Board of Education is certainly appreciated and being a part of the team that works directly with them, it’s representative of the entire community and not me alone. It’s really about the Pal-Mac community and the students, the staff and the parents.”

Pursuing a Certificate of Advanced Study in Educational Administration at SUNY Cortland helped prepare him for a career as a principal and superintendent.

“The coursework was taught by practitioners and leaders in the field of education,” he said. “The experiences were practical and authentic. The coursework led to real life leadership on the line. The internship kind of sealed the deal and put that together to prepare me for the next step.”

Ike hopes C.A.S. candidates, master’s students and undergraduates alike can learn something from his lecture. Teachers and administrators from local school districts also have been invited to attend.

“He’s not afraid be involved with innovative practices,” Manaseri said. “Part of the conversation will be about how schools in the 21st century will be fundamentally different than schools in 19th and 20th centuries.”

The talk is co-sponsored by the Campus Artist and Lecture Series.