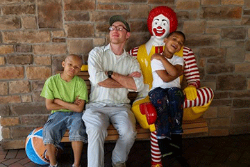 
The Ronald McDonald House in Syracuse, N.Y., strives to be a home-away-from home for families traveling to get critical medical treatment for their child.

Michael Rosenthal ’14 is the friendly face that greets these tired and worried guests during a weekly 24-hour overnight shift at the 25-bedroom guesthouse. For Rosenthal, who is completing his Master’s in Public Health at Upstate Medical University, it’s both an opportunity to help people in crisis while training for a future career.

“It’s definitely a challenging job,” he said of his volunteer work. The former Hairy Tony’s cook feeds the families, provides everyday items like towels and toiletries, maintains records on their stay and supervises other volunteers who complete the weekend staffing.

“Right now my focus is helping at-risk children and families in Onondaga County,” said Rosenthal, 26. “But the drive and passion I feel for this work all spawns from being a volunteer.”

“Volunteering is basically a product of how I immerse myself in fields. When I am interested in something, I pursue it with everything I have.”

In addition to the Ronald McDonald House, Rosenthal mentors pediatric patients at Upstate Medical University, as well as runaways and adult clients of different area homeless shelters and halfway houses.

“Every time I show up to help out I try to brighten someone’s day. Sometimes people are in a crisis and need someone to talk to, but most of the time it’s just as simple as being present and attentive,” he said. “I find that this type of help is easily doable and it’s doable right away.”

Not long ago, Rosenthal instead aspired to be an entrepreneur or a government leader.

He arrived at SUNY Cortland as a non-traditional student with an Associate of Science in Business Administration from Onondaga Community College, and lots of life experience as a cook and aspiring musician.

A dedicated Spanish scholar in junior high and high school, at SUNY Cortland he served as a research assistant for the Department of Modern Languages. His scholarship and extracurricular involvement earned him a Willi A. Uschald Study Abroad scholarship, allowing him to experienced a new culture and complete a six-week immersion program at La Escuela de Idiomas in San Jose, Costa Rica.

By graduation he had decided to become a politician. Then he made a 180-degree turn.

“Whether I was thinking about being an entrepreneur and getting rich or going into politics and dealing in power, they were both so self-centered to me,” Rosenthal said. “Making a switch over to social work and health care seems kind of the opposite. It feels more important in a way because I’m not focusing on my own personal gain.

“And it feels more fulfilling overall because I’m not making (political) compromises each day. I’m not always choosing ‘the lesser evil.”

The altruistic path his life has taken is less surprising in light of how his mother, Nancy Dickerson ’85, made her own career in social work. She has a Master of Social Work from Syracuse University. She is employed as an adjunct professor at SUNY Cortland and TC3 and does private practice counseling.

“Instead of thinking I was going to change the face of the planet by being someone with a very broad reach, it’s more like I can change people’s lives on a day to day basis, and the influence that I put out there spreads from person to person, organically,” Rosenthal said.

As a graduate assistant at Upstate Medical University, he has coordinated volunteer service learning opportunities for first year medical students.

Having earned a 4.11 grade point average at SUNY Cortland and an only slightly lower one in his two semesters at Upstate, he is not intimidated by the medical students and other classmates with more conventional public health resumes sitting beside him in the classroom.

“My experience with politics and law is very helpful in my program since I’m the only one with this background in my cohort,” Rosenthal said. “I’m finding my knowledge is more practical than that of the medical students. We’re not dealing with genes or chromosomes. We’re dealing with people. We’re trying to get opinions.”

For instance, during the 200-hour master’s degree practicum he completed at the Ronald McDonald House earlier this summer, Rosenthal used data analysis software familiar to political scientists to track how efficiently medical staff at Upstate and affiliated clinics refer families of out-of-area pediatric patients to stay at the free ‘home away from home.’

The data helps reveal, from a public health standpoint, whether certain medical providers are in need of additional training to offer a better continuum of care to families in their time of distress by referring them to a Ronald McDonald House stay, which parents or guardians can’t arrange on their own, he said.

Looking toward his graduation next May, Rosenthal will continue to research his master’s thesis by adding a second year of personal, one-on-one volunteer service at area homeless shelters. His capstone project will explore a very large population that is underserved by existing area public health services: displaced gay, lesbian and transgendered teenagers.

“If a person is gay and homeless, maybe they don’t feel safe in a conventional shelter,” Rosenthal theorized. “Maybe they go about being homeless in an entirely different way. They’ll stay with different people. These might be safe situations or they might not be.”

Rosenthal has talked with many area young men and women as well as staff at the mainly religious-affiliated temporary residences to discover what pushes these youths out of their families so early in life, and why this group apparently avoids available local shelters and services.

“Homelessness is a big issue in this country right now,” Rosenthal said. “To think there’s a specific gender and sexuality-based homelessness problem that presents itself in a different way leads to the question of ‘How do we remedy that?’

“It definitely merits looking into and seeing how we can allow gay and transgendered people to feel more comfortable using the traditional style of social services that are available as well.”

Presently he’s convinced that his SUNY Cortland experience has helped him find his chosen path.

“It’s why I’m enjoying this program so much,” Rosenthal said. “I can feel competent while walking into new situations and saying, ‘Here I am.’”