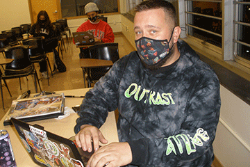 
Ten years ago, Mathew Adams had everything going for him.

The Lansing, N.Y., high school graduate had returned to his home town after working full time on Long Island, focused and determined to earn his associate’s degree at Tompkins Cortland Community College, then pursue a bachelor’s degree at St. John’s University.

“I had every intention of fulfilling what I needed to enroll at St. John’s,” said Adams, 38. “I was on a pretty serious path about my studies.

“Then, the house I was living in with two of my friends burned down and one of my best friends passed away in that fire,” he said. Adams lost his good friend Ryan Burris in 2011.

“I had spent some time in the hospital after that because I had tried to go in and get him out and I didn’t succeed. I ended up with some burns and bad smoke inhalation.”

That was Adams’ story from about 10 years ago to two years ago, when he enrolled at SUNY Cortland.

“I was trying to process that whole situation, putting myself back out there. It took a long time. I’m not sure I’d be where I’m at now, in terms of the success I’ve enjoyed here, without me going through that whole process.”

Adams’ story took a turn for the better two years ago when he and his girlfriend, Brittany Morgan ’21, had a spat.

“It was spring semester two years ago when my fiancé, who is eight years my junior, had decided to finish her degree here. We were arguing, and she said, ‘Why don’t you go back to school?’ And I said, ‘Why don’t I?’”

And the next semester he enrolled at Cortland. Morgan subsequently demonstrated the value of a Cortland education by graduating with a degree in health care management on a Friday and landing her first post-graduate job the following Monday, working for an assisted living care facility in Ithaca, N.Y.

Adams is now a second semester senior communication studies major who graduates in December. He is also a radio personality.

And, like many non-traditional students, Adams leads sort of a double life, split between the campus and his home, fiancée and job in Ithaca, N.Y.

“When I’m not at work I’m usually here. It’s just the reality of it.”

Adams still found time to serve as a judge of movies competing in this past summer’s Blackbird Film Festival.

Adams also recently won a $2,500 scholarship from Alpha Sigma Lambda toward his university expenses in a prestigious national competition for non-traditional students.

“Honestly it helped me out tremendously, financially,” Adams said. “It’s humbling, too. I try not to get too caught up in successes or failures.”

Created in 1945, Alpha Sigma Lambda awards scholarships to assist adult learners financially who are earning their first undergraduate degree. Only 20 were offered this year.

Colleges all over the country can refer up to two nominees to the competition, and Adams becomes the fourth SUNY Cortland candidate to be honored with a monetary award since 2010. Past honorees include Rachel Alexander ’10, Karyn Scott ’16 and Corrine Edick ’17.

“I didn’t expect to win the scholarship,” Adams said. “I went onto the Alpha Sigma Lambda website, because they do profiles of some of their scholarship winners, and read these stories.

“Once you reach a certain age you realize everyone’s got a story,” said Adams “I thought, ‘Oh, these amazing people on there, they’re doing exactly what I’m doing plus they have a couple of kids. Some of the younger non-traditional students there amaze me, too, because I remember not being that focused when I was that age.”

Adams isn’t sure what he’ll do after he graduates in December, but he might hang around to take two classes to clinch a concentration in journalism while extending his role at WSUC 90.5 FM. Those choices were enabled by the unlooked-for Alpha Sigma Lambda scholarship.

“When they told me I was one of the two nominees out of Cortland, that was honor and validation enough,” Adams said. “I never expected to win.

“I would probably credit all the people who supported me in coming back to school, including a number of great professors here. And my classmates as well and my family’s been great.”

SUNY Cortland acknowledged individuals including Adams from Monday, Nov. 15, through Friday, Nov. 19, during its celebration of Non-Traditional Students Week. Stories about Adams and other outstanding non-traditional students were shared during the week, which also included a host of special activities, both on campus and virtually.