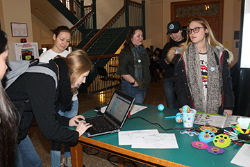 “It’s a really powerful computer-aided mapping technology that helps us ask and answer interesting questions that have a ‘where’ to them,” said Shimizu, who co-directs the SUNY Cortland Regional GIS Laboratory, located in Old Main. “Like, ‘Where should we put a landfill so it won’t pollute our water?’ Or ‘Where should we build a new highway?’”

Shimizu and laboratory co-director Chris Badurek, also an assistant professor of geography, answered many  questions about this major at the GIS Day Celebration on Nov. 14.

A steady stream of students, faculty, staff, and other visitors who wanted to find out more about the major while enjoying games, stickers and a map competition found their way to Old Main Fowler ’52 Grand Entrance Hall from 10 a.m. to 1 p.m. that day.

There, at tables in front of Brown Auditorium, the faculty who teach GIS as well as current students enrolled in the program gathered voluntary data from 119 visitors on their hometown communities and handed out about 100 miniature, “globe” stress balls as well as candy and prizes.

“We had encouraged them to come add your hometown as we tried to find out who traveled here the furthest,” said Shimizu. “We tried to see how many states and countries we could get on the map, too.”

The information, from 70 students and 37 faculty, staff and administrators, was used to produce maps including New York state, the United States and the globe expressing the participants’ hometowns. The furthest distance anyone traveled to participate in the GIS experiment was 6,898 miles, from Qingdao, China. The closest, zero miles, of course came from Cortland. In between were nine states and seven countries represented.

According to the Bureau of Labor Statistics, GIS specialists, otherwise known as cartographers and photogrammetrists, at the bachelor’s degree level are predicted to have a job growth of 19 percent from 2016 to 2026. The 2017 median pay was $63,990 per year.

“It’s one of the growing fields,” Shimizu said. “And partly why it’s growing so much is because it’s not any one field. You can use it in biology, geology, business, health and community services.

“Lots of different fields are wanting people who can do basic spatial analysis,” she said. “It’s figuring out where things are and why they are where they are.”

GIS uses satellite technology to develop maps for all kinds of purposes. The really cool major and its sizzling hot career potential make it one of SUNY Cortland’s most satisfying career paths.

“One student said, ‘It’s like Google Maps plus Excel,’” Shimizu said. “You get the table of information and the map, and they go back and forth.”

Shimizu said she tries to recruit new majors from students who have expressed a willingness to try new things as well as ones who are able to think carefully and creatively about a problem they would like to solve.

“Mathematics, computer science and statistics skills, it’s what most people expect for the major and that can help,” she said. “But I can teach you those things.

According to Badurek, SUNY Cortland graduates in the GIS major have had great success attaining jobs in the industry or in directly related fields.

“For example, recent graduates have been offered jobs in applying GIS to the utilities industry, aerial photography industry or in local government,” Badurek said.

Graduates are working across New York state and the northeast at such businesses as EagleView, BAE Systems, NY American Water, Osmose Utilities and O’Brien and Gere engineering, he said. Students also have governmental careers with Suffolk County Department of Information Technology, the Tug Hill Commission, Oswego and Cayuga counties.

“We also train students who aspire to careers as military officers with students joining the U.S. Air Force and U.S. Army,” Badurek said.

“We also support Cortland students working in GIS with majors such as conservation biology and geology,” Badurek said.

As a stepping stone to a more analytical GIS career, several recent graduates have completed master’s degrees related to GIS at Binghamton University.

The field is evolving and SUNY Cortland is as well.

Recently, the SUNY Cortland Institute of Applied Geospatial and Drone Technology was created to share in part of a $10 million Downtown Revitalization Initiative award presented to the City of Cortland. The institute, led by members of the College’s Geography Department, serves as a resource for entrepreneurs and startup companies as the City of Cortland strives to become a hub for GIS and drones. Funding will be used to renovate existing space on Main Street for meeting and office spaces as well as the purchase of equipment. An outdoor drone testing facility is also part of the project plan.

“Overall, we have a strong network of GIS alumni working across the Finger Lakes region, ranging from Rochester to Syracuse, and also in the greater New York City metro area ranging from the city to Long Island,” Badurek said.

The Geography Department uses its LinkedIn alumni group to maintain contact and encourage new graduates to connect with former graduates already working in the field.

According to one former major, Mary Colomaio ’15, who has managed the utilities mapping program at Cornell University, GIS “applies to every field of work and has a bigger role in our life than we know.” At Cornell, she has worked to develop a new GIS database which, compared to most such systems in the country, will be more capable and accessible across campus departments.

Anthony McKeon ’01 was one of the first SUNY Cortland geography majors to graduate with the then-new geographic information systems (GIS) concentration, which several years later became a major. In 2009, he was the team lead GIS analyst for the National Guard Bureau Joint Coordination Center (NGBJCC) in Arlington, Va. He quickly created maps and data to help America’s leaders establish rescue plans for communities facing fire, flood, hurricane, earthquake and volcano eruption. McKeon also was involved in the logistical details of 44th U.S. President Barack Obama’s historic march to the capitol for the swearing-in ceremony.

The event was sponsored by the Faculty Development Center and the Geography Department. For more information, use the #whereiscortland hashtag on social media or contact Shimizu at 607-753-2992.