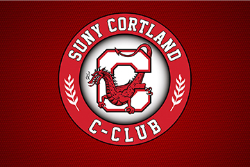 
Seven new members were inducted into the SUNY Cortland C-Club Hall of Fame during its annual ceremony on Saturday, April 30. The induction class was originally selected in 2020, but the ceremony was postponed on a few occasions due to the COVID-19 pandemic.

The story was originally posted on the Cortland Red Dragons website on April 29.

In addition to Saturday night's official ceremony, the inductees were introduced at halftime during the Cortland-Geneseo men's lacrosse game earlier that afternoon.

Established in 1969, the C-Club Hall of Fame recognizes Cortland alumni who competed as athletes at the university and who have since distinguished themselves in their professions and within their communities. Honorary members are recognized for their long and significant contributions to SUNY Cortland athletics. New C-Club members have been added annually and this year's ceremony will bring the Hall of Fame roster to 276 alumni and 31 honorary members.

A person must be nominated in order to be considered for induction into the Hall of Fame.

A detailed look at this spring's inductees follows.

Robert Branham was a two-time All-American and three-time NCAA qualifying golfer at Cortland, and a long-time coach and teacher, primarily in the Norwich City Schools.

* Selected for Outstanding College Athletes of America for 1975 for leadership, service, scholarship and outstanding athletic achievement

* First amateur to ever qualify for the BC Open golf tournament in 1983; also amateur participant in a Ben Hogan Tour Tournament

* Member of Section 4 Hall of Fame as a 1973 Oxford Academy and Central School alumnus who competed in football, basketball, baseball and golf

James Burke was a three-time All-America defenseman for Cortland's men's lacrosse team from 1975-78 who went on to become one of the world's top lacrosse players on three U.S. world championship teams

* A Huntington, N.Y., native, he earned a bachelor's degree in health science education from Cortland in 1978

* Three-time All-American, earning first team honors in both 1976 and 1978 and second team recognition in 1977

* Member of U.S. national men's lacrosse team that won world championships in 1982, 1986 and 1990, and was a team alternate in 1978. In 1986 he was a team captain of the U.S. squad, was voted the Outstanding Defenseman of the World Games, and earned a spot on the All-World Team as the U.S. defeated Canada, 18-9, in the gold medal game in Toronto. The U.S. also defeated Canada, 19-15, in the 1990 championship game in Perth, Australia, with Burke taking over faceoff duties during the game to help propel the Americans to the title

* 1992 Long Island Lacrosse Hall of Fame; played for more than a decade with the Long Island Lacrosse Club, where he was a perennial All-Club selection and a key to six championship teams in the USCLA, at the time the top post-collegiate field lacrosse league. He also played club lacrosse in California as well as masters tournaments in Vail, Lake Placid and Florida

* Coached youth lacrosse in Florida in 2016

* Passed away peacefully at his family home on April 8, 2020, following his four and a half year battle with prostate cancer

Michael Chiapparelli, a former baseball catcher for the Red Dragons, has been one of the most successful coaches in New York State history in both baseball and ice hockey for 42 years at Mamaroneck High School

* Played baseball for four seasons from 1975-78, primarily as a catcher, with time in the outfield as a senior

* More than 1,300 combined victories at Mamaroneck, his alma mater, as head coach of the varsity ice hockey and baseball teams and the junior varsity football and ice hockey programs

* Mamaroneck varsity boys' ice hockey coach since 1998, as well as from 1985-94 – his 527 wins rank first all-time in New York State, and his teams, along with long-time assistant Art Bruno, have won eight sectional titles, nine league championships and five regional championships, won the 2016 state title and was runner-up in 2009

* Earned 2010 Frank McGuire Award from the New York Athletic Club, given to top coaches in the tri-state area

Cydney Archer Scarano was an All-American on Cortland's 1980 women's soccer national championship team, and she has coached the sport on the scholastic and collegiate levels for more than 30 years since her graduation.

* As a senior in 1980 earned All-America honors (first year women's All-Americans were selected) and first team Eastern Association for Intercollegiate Athletics for Women (EAIAW) all-region recognition, and was an all-region honoree in 1979

* Finished with a combined 27 goals and 10 assists for 64 points in three varsity seasons, including 10 goals and seven assists in 1978 and nine goals and three assists in 1980

* Helped Cortland win the first-ever U.S. National Women's Soccer Championship in 1980, scoring a goal in a 5-1 win over UCLA in the national finals, and during a run to the EAIAW regional title scored goals versus top-seeded Princeton in the first round, Harvard in the semifinals, and Connecticut in the finals

* Scored tying goal with less than 14 minutes left in regulation in 1979 EAIAW regional final versus Harvard; teams were declared co-champions after a 1-1 tie

* Environmental attorney in Syracuse from 1991-94

Katie Finch Talbert is the most successful softball pitcher in the history of the State University of New York Athletic Conference (SUNYAC). The three-time All-American is the conference's all-time leader in wins and strikeouts and helped lead Cortland to three league crowns and two NCAA Division III World Series appearances.

* Named to the SUNYAC Softball All-Decade Team (players who competed at least one season from 2010-19); SUNYAC career leader in wins and strikeouts

Jessica Laing Clark is one of the best women's basketball players in the history of the State University of New York Athletic Conference (SUNYAC). A three-time All-American, she is the conference's career scoring leader and is ranked second in league history, and first at Cortland, in rebounding.

* Only player in NCAA Division III history to finish career with the combination of at least 2,000 points, 1,000 rebounds and 100 made 3-pointers

* Team won at least 24 games in each of her four seasons, won two SUNYAC titles, played in three NCAA tournaments (advanced to second round in 2007 and 2009), and won the 2008 ECAC Upstate NY tournament

* Since 2018 has sponsored foster children and teens by providing them with Christmas gifts, along with providing holiday meals for families in need, through Delaware County Social Services

One of the most successful coaches in the history of collegiate softball, Julie Lenhart led Cortland to more than 800 victories, 17 NCAA tournaments and 12 league titles during her 25 seasons at the College.

* A native of McComb, Ohio, she earned a bachelor's degree in physical education and health from Ohio Northern University in 1980 and a master's degree in counselor education, with an emphasis in school counseling, K-12, from Wisconsin-Platteville in 1990

* Served five seasons as softball head coach at the University of Wisconsin-Platteville from 1990-94, along with six seasons as volleyball assistant coach

* Guided the Red Dragons to 12 State University of New York Athletic Conference (SUNYAC) titles, and her teams finished either first or second in the conference tournament every year from 1998-2019

* Her Cortland squads between 2015-17 became the first, and still only, teams to win three consecutive SUNYAC tournament titles

* Softball, basketball and volleyball letterwinner at Ohio Northern University and a 1996 inductee into the ONU Athletic Hall of Fame

* Taught physical education, science and health, and coached softball and volleyball, at the North Central Schools in Pioneer, Ohio, from 1980-88