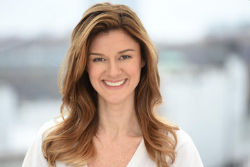 
Substance abuse is often a taboo issue, but SUNY Cortland will embrace the inspiring story of addiction recovery with a film screening and panel discussion with actress and filmmaker Marisa Vitali.

The 2015 short film “Grace,” produced by Vitali and directed by Chris Ordal, will screen at 6 p.m. on Tuesday, April 10 in Old Main Brown Auditorium. The panel discussion will follow.

Presented by the Psychology and Sociology/Anthropology departments and the Substance Abuse Prevention and Education Office, the screening and discussion are free and open to the public.

“Grace” depicts a young woman’s struggle with heroin addiction and how it affected her career and everyday life. The film’s events are based upon Vitali’s real experiences with addiction and recovery, and Vitali herself plays the protagonist.

The film has screened at various prestigious film festivals, including the Cannes Film Festival, and has received numerous awards and accolades.

“I felt like a turtle without a shell, raw and emotionally exposed,” Vitali said. “This was the story I wanted to tell in the film ‘Grace.’ Anyone can watch a film and learn how to shoot a bag of dope or smoke a crack pipe. I wanted to tell a story of hope and recovery and bridge a gap between addicts and non-addicts to start the conversation of recovery.”

Vitali, who presents the film across the United States, reached out to Peck, an associate professor of psychology, about bringing it to SUNY Cortland.

“It really is a film of hope,” Peck said. “Our goal is to get the conversation going. How do we move towards recovery and what does recovery look like?”

Vitali was inspired to tell her story through film after writing it down in many different forms, each time struggling to find an ending to the stream of consciousness. It occurred to Vitali that the story of her difficult recovery process was what audiences needed to see. Vitali hoped the film would bring addicts and non-addicts together for a positive conversation on the subject, as during her recovery she noticed a disconnect between those two worlds.

“This is a unique opportunity for students to have direct access to an actress who has experienced addiction and recovery and is now living a productive life,” Peck said.

Peck believes this event is timely, as alcohol and opioid abuse on college campuses remains a disturbing trend. Students should be aware that there are resources available to them if they seek help.

“We need to get the message out for our population struggling with addiction,” Peck said. “There is a recovery process. You’re not destined to always be an addict once you’ve become one.”