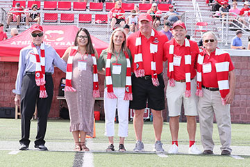 
Seven new members were inducted into the SUNY Cortland C-Club Hall of Fame during its annual ceremony on Saturday, Sept. 10. The 2022 honorees are:

In addition to Saturday night's official ceremony, the inductees will be introduced at halftime of the Cortland football game versus The College of New Jersey earlier that afternoon.

Established in 1969, the C-Club Hall of Fame recognizes Cortland alumni who competed as athletes at the College and who have since distinguished themselves in their professions and within their communities. Honorary members are recognized for their long and significant contributions to SUNY Cortland athletics. New C-Club members have been added annually and this year's ceremony will bring the Hall of Fame roster to 282 alumni and 32 honorary members.

Nominations for the 2023 C-Club Hall of Fame voting will be accepted until January 15, 2023. The nomination form is available online at: http://www.cortlandreddragons.com/nominations. A person must be nominated to be considered for induction into the Hall of Fame.

A detailed look at this fall’s inductees follows below.

Bill DeSario was a two-time Division I All-America wrestler at Cortland who went on to enjoy more than 45 years as a highly successful educator and coach in Suffolk County.

* Won 130-pound titles at the 1967 and 1968 4-I tournaments, which featured top collegiate and AAU wrestlers from Michigan, Ohio, West Virginia, Pennsylvania and New York

* SUNY Brockport’s varsity wrestling head coach in 1968-69, leading the program to a 9-4-1 record and SUNYAC runner-up finish and being named honorable mention for the Amateur Wrestling News Collegiate Rookie Coach of the Year award

A lacrosse midfielder and All-America wrestler at Cortland, Rory Whipple is one of the NCAA’s most successful men’s lacrosse coaches with 359 wins over 38 seasons.

* The Rochester, N.Y., native earned a bachelor’s degree in physical education from Cortland in 1975 and an associate degree in recreation from Farmingdale State in 1974

* Collegiate men’s lacrosse head coach for 38 years with a combined record of 359-212; currently ranks 10th all-time in wins among men’s lacrosse coaches across all NCAA divisions

* During his coaching tenure at Tampa he led the Spartans to a 131-38 record, seven NCAA Division II tournaments (including three national semifinals), and six Sunshine State Conference (SSC) titles, and he was named SSC Coach of the Year four times

* Hartwick’s career leader with 114 wins, including the program’s first NCAA playoff berth in 1995

* Head wrestling coach at Clarkson for 10 seasons from 1976-86, leading the program to multiple top-20 national rankings

* 1989 inductee into both the Upstate New York Wrestling Chapter and U.S. Lacrosse Chapter Halls of Fame, and a 2010 National Junior College Lacrosse Hall of Fame inductee

Dan MacNeill is the most successful head football coach in school history in his 23-year tenure at Cortland and was a four-year player for the Red Dragons in the late 1970s.

* The Walton, N.Y., native graduated from Cortland in 1979 with a bachelor’s degree in physical education and earned a master’s degree in educational administration from Villanova University in 1994

* 2008 Liberty Mutual National Coach of the Year finalist as Cortland finished 11-2, advanced to the NCAA quarterfinals to tie for fifth nationally, and was recognized as the East’s top team with the Lambert Trophy and ECAC Team of the Year awards

* Coached 30 All-Americans, 94 All-East and 77 All-ECAC players, and his players earned 50 All-Empire 8 and 204 All-NJAC honors during his Cortland tenure

* Assistant coach at Division I-AA Villanova University for 13 years from 1984-96, including defensive coordinator for nine seasons

* Spearheaded Cortland Football’s “Get in the Game” national bone marrow registry program, which was responsible for adding more than 2,100 potential donors to the national registry and resulted in seven transplants

Michelle Franklin-Rauber was a three-time national champion distance runner at and has been one of New York State’s top track and field and cross country coaches since the mid-1990s at Tully High School.

Sarah Child is a former All-America field hockey player at Cortland who has established herself in the science world with her studies of Antarctic glaciers and other remote sensing and data processing work.

* Played in 75 games, 69 as a starter, and helped lead a defense that allowed only a combined 77 goals over her four seasons

* During her senior year the Red Dragons finished 19-1, including an 18-0 mark prior to the NCAA tournament – the first time Cortland posted an unblemished regular-season record (matched once since by the 2009 team)

* Received Cortland’s Olive C. Fish Award in Geography in the spring of 2006

* Currently a research scientist at the University of Colorado, Boulder, where her research with the Cooperative Institute for Research in Environmental Sciences (CIRES) focuses on multi-decadal changes in glacier dynamics for the Antarctic and Greenland Ice Sheets

* Her research in glaciology has been published in peer-reviewed, international journals as well as presented at several international conferences and meetings

* Received the 2016 Jack Dangermond/Environmental Systems Research Institute, Inc. (Esri) Geospatial Technologies Student Award while at the University of Kansas for her work standardizing the state of Kansas’s geological databases and creating an automated template for future geological mapping

* Special teaching assignments have included: core teaching in the summers of 2013 and 2014 at the all-girls science and math camp TechTrek, run by the American Association of University Women (AAUW) to help empower 12 and 13-year-old girls in the STEM fields; and conducting remote sensing of glaciers course at the University of Alaska, Fairbanks’s McCarthy Glacier Summer School in 2022

Donnalyn Cross Moran ’12
Donnalyn Cross Moran was one of the nation’s top Division III softball players during her four-year Red Dragon career and is among the best players in the history of the State University of New York Athletic Conference (SUNYAC).

* The Binghamton, N.Y., native earned a bachelor’s degree in speech and hearing sciences from Cortland in 2012

* Started her own dog training company in 2016 and has trained more than 10 police K9’s, including SUNY Cortland’s bomb detection dog, RED

* Also runs a dog daycare and boarding facility in Cortland, which opened in May 2020

* Has donated dogs to Operation Build Up, which assists struggling veterans and first responders, and has trained and donated dogs to the John Sonny Burke Police Academy and the City of Cortland Police Department

* Began working at Cortland in 1970 as a physical education instructor, was promoted to assistant professor three years later, was named associate professor in 1981, and served as the chair of the Physical Education Department from 1990-97, 1998-2000 (interim dean of Professional Studies in 1997-98), and from 2000 until his retirement in 2008 as Associate Professor and Chair Emeritus of Physical Education

* As men’s lacrosse head coach for seven seasons from 1984-90 his teams posted a combined 60-44 record and made six NCAA Division III tournament appearances, including national semifinal showings in 1985 and 1986

* Led Cortland to four SUNYAC men’s lacrosse titles, with the team never losing a league game (24-0 record; the conference did not sponsor the sport during his final three years), and was named SUNYAC Coach of the Year in 1985 and 1986

* Men’s lacrosse assistant coach for nine seasons from 1974-82, during which time the program made eight NCAA appearances and won the 1975 NCAA Division II title

* Head lacrosse and wrestling coach, and assistant football coach, for three years at Baltimore Junior College from 1964-67; his 1967 lacrosse team was undefeated and won the unofficial national junior college championship

* Prior to his arrival at Cortland he was the district chairman of health and physical education of the Northeastern School District of York County (Pa.)

* Researched and wrote an extensive campus essay on the genesis and evolution of physical education at Cortland, including the history of Cortland Athletics, as part of the College’s 2018 Sesquicentennial history project

* Has worked numerous summer lacrosse camps and clinics at Cortland, and has served as the Cortland/Homer Youth Hockey President