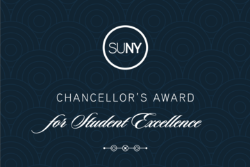 
Three SUNY Cortland seniors who will graduate in May were honored with the 2021 State University of New York Chancellor’s Award for Student Excellence.

The award, announced today, is given to students within the SUNY system’s 64 campuses who have been recognized for their special achievement in at least three of the following areas: academic excellence, leadership, campus involvement, community service or the arts.

The award recipients are:

“Our students have sacrificed so much over the last 13 months," said SUNY Chancellor Jim Malatras. "Now more than ever, it is imperative that we mark the milestones and celebrate the brilliance, vision, resilience and community stewardship of SUNY’s best and brightest. It is my great honor to present the Chancellor’s Awards for Student Excellence to these truly incredible students. Undeterred by the challenges of a once-in-a-generation health crisis, they have all overcome significant odds to pursue their academic passions, become campus and community leaders, help and inspire others and foster a better world for us all. Congratulations to all the winners and a heartfelt thank you for making the SUNY system proud.”

Each year, SUNY campus presidents establish a committee to review and select outstanding graduating seniors. This year, campuses were invited to forward up to three nominees to the Chancellor’s Office for a second round of review and the selection of a group of finalists.

Each honoree will receive a framed certificate and a medallion to wear during Commencement, which will take place as in-person ceremonies on Wednesday, May 12 and Thursday, Mary 13, in Lusk Field House, and in virtual ceremonies from Wednesday, May 12 through Saturday, May 15. More information is available online.

Because of the COVID-19 pandemic, it wasn’t possible this spring for the students to be invited to Albany to receive the award directly from the chancellor and a campus representative, usually President Erik J. Bitterbaum. Instead, SUNY invites the public to join a virtual award ceremony that will premiere live on Wednesday, April 14, beginning at 2 p.m. All are welcome to join. More information about the event is available.

A complete listing of student recipients is available.

Including this year’s honorees, 99 SUNY Cortland students have earned the Chancellor’s Award for Student Excellence since the program began in 1997.

Here’s a closer look at each of the honorees:

From being the vice president of the board of directors for the Cortland Auxiliary Services Corporation to joining the SUNY Student Assembly, Humphrey has demonstrated the ability to lead.

SUNY Cortland recognized Humphrey’s achievements as an exemplary role model for other students on campus in 2020 when she received the Outstanding Student Leadership Award.

Along with several other academic awards and scholarships, she is an inductee of the Cortland chapter of Pi Sigma Alpha, the national honor society for undergraduate political science majors. Humphrey’s academic accomplishments also include a Michael C. Holland Scholarship, given to students in good academic standing involved with the Student Government Association.

In fall 2021, she will pursue a master’s degree in U.S. foreign policy and national security at American University.

“One day, I hope to join the U.S. Foreign Service,” Humphrey said. “SUNY Cortland has given me the tools that I have needed to succeed in a fast-paced and everchanging workforce and given me incredible leadership opportunities to develop myself.”

Growing up in the Bronx, Simmelkjaer did not have the same access that other students had when it came to learning about colleges and how to be successful in a more professional environment.

“There was really nobody to hold my hand through the college process,” Simmelkjaer said. “I really had to do that on my own. I had to figure out the Common App.”

Simmelkjaer was originally looking at private colleges but was not aware of how expensive it could be. Despite being valedictorian and having a strong academic transcript, private colleges did not provide Simmelkjaer with enough scholarships and financial aid to attend.

Yet after visiting SUNY Cortland, Simmelkjaer knew that she had found her college.

“When I actually visited the campus, it was just so beautiful to me,” Simmelkjaer said. “I just fell in love with the atmosphere. I didn’t see anybody who looked like me, but then I was just like, ‘I need to get out of the Bronx and expand my horizons.’”

And that is exactly what she did. Simmelkjaer got in touch with other people of color on campus who directed her to areas on campus that were culturally relatable to her. She learned about the DRAMA (Diversity, Rhythm and Movement Association) dance team and other multicultural clubs/organizations.

“Freshman year, it was a bit of a culture shock for me coming in,” Simmelkjaer said. “I would imagine for Black girls it would be a culture shock. Personally, I haven’t been around people that didn’t look like me my whole life because I grew up in the city.”

Being in a predominantly white area did not stop Simmelkjaer from embracing Black culture and educating others on the Black experience. She has been a speaker for many multicultural events, such as “The Forgotten Faces: Discussing the Socio-Political Climate on Campus” and “Black Lives and Liberation Forum: Supporting Women of Color.”

Despite not having the same preparation for college like others do, Simmelkjaer was able to make her mark on the Cortland campus. She has excelled academically, and she has numerous academic awards/scholarships to show for it. Simmelkjaer was SUNY Cortland’s 14th recipient of the prestigious Benjamin A. Gilman International Scholarship and she is the 2021 recipient of Pi Sigma Alpha’s Best Portfolio Award for Senior Political Science majors.

Simmelkjaer attended Black Student Union meetings and recalled important conversations they had about issues facing people of color, such as police brutality.

“I just saw students mass mobilizing, marching around campus for things that they were so passionate about,” Simmelkjaer said. “I told myself, ‘This is something that I want to get involved in.’”

Simmelkjaer knew that the work that the Black Student Union did, like the Forgotten Faces Panel, positively changed the SUNY Cortland campus. When she became BSU vice president during junior year, the COVID-19 pandemic hit. Simmelkjaer knew that she had to make the club stronger during her senior year, in which she became the club’s president. Despite the pandemic, BSU was still able to successfully hold their Black Out for Justice March virtually as well as many other important events.

Currently, Simmelkjaer is focusing on working on her healing and personal growth. There were a lot of challenges she went through during these hard times and she knows that it is time to put herself first.

“COVID forced me to just reflect on myself and reflect on why I was getting burnt out so easily,” Simmelkjaer said.

When she found out she was a recipient for the Chancellor’s Award, Simmelkjaer knew her hard work paid off.

“I was just proud of myself,” Simmelkjaer said. “I did something good for this campus, and that's all I really wanted.”

Simmelkjaer is planning to attend graduate school at the University at Albany and is choosing between the African Studies and Criminal Justice programs. She eventually wants to earn a Ph.D.

Simmelkjaer will miss the parties that the Voice Office clubs held in Corey Union and the campus wide initiatives that made positive impacts in people’s lives. There have been people that have come up to her explaining how their mindsets have changed from an event she’s held or a speech she’s given.

“I feel like when I leave this school, people are going to remember me,” Simmelkjaer said. “And even if they don’t, down the line, I can remember what I did for myself and for this school. That’s something really special to me.”

Emily Speciale always knew that gymnastics would be a part of her college journey. She started gymnastics at the early age of 6, so her passion only grew from there and motivated her to seek out colleges that were over 1,500 miles away from her hometown, San Antonio, Texas.

“Most of the Division III schools are actually located up north,” Speciale said. “So, I knew I was going to be going out of state.”

After visiting campus, Speciale could see a place for herself at the university. From there, Speciale has been an essential part of the gymnastics program and has won multiple awards for her athletic skills. She did not stop there, however. Speciale excelled academically and has been inducted into multiple honor societies. Her love of the Cortland community made her an active volunteer, and she was able to coach children on how to do the thing she loves most, gymnastics.

“[The coach] was telling me all these great things about SUNY Cortland,” Speciale said. “Then I visited, and I fell in love with the people who I met, the campus, just everything about it. I knew was the perfect fit for me.”

There were some sacrifices that Speciale had to make when deciding to attend SUNY Cortland. One of those sacrifices was leaving the warm Texas weather.

“It does not snow where I'm from at all,” Speciale said. “The first winter was brutal. I've never been in less than 20 degrees”

Some of Speciale’s favorite memories of being a SUNY Cortland gymnast include touring the Air Force Academy and getting to fly a flight simulator.

“It was really cool,” Speciale said. “Somehow, I didn’t crash. I was very proud of myself.”

Another favorite memory of Speciale’s includes the team’s visit to an alligator park in Louisiana last year. She even got to hold a baby alligator.

At the conclusion of her junior season — she unfortunately lost her senior season to the COVID-19 pandemic — Speciale was named at National Collegiate Gymnastics Association (NCGA) All-American in the all-around and was selected to the NCGA’s all-championship team on bars.

“I have gotten so many amazing opportunities,” Speciale said. “It’s amazing and I’m so grateful.”

Speciale would say that one of her biggest accomplishments is getting into a physical therapy doctorate program. That has been one of her goals for a long time and the program is very competitive.

Speciale will be starting her doctor of physical therapy program in the University of Texas Southwestern’s School of Health. She is hoping to take the test to become a licensed pediatric physical therapist. Her exercise science classes provided Speciale with the challenge that was necessary to retain the information.

“It wasn’t just study, take the test, then forget,” Speciale said. “I really learned, and I think the professors really helped me with that.”

Her classes helped solidify her love of learning about the human body, and Speciale is especially appreciative to one faculty member in particular. Carie George, a lecturer in anatomy and physiology, has inspired Speciale to continue in her field.

Speciale first learned of the Chancellor’s Award through Matthew Norris ’19, a previous recipient who was instrumental in launching a program for student-athletes called Mental Health Mondays. She decided that she wanted to apply.

“I'm so honored, it's just such a great accomplishment,” Speciale said. “All my hard work is validated.”

Speciale enjoys giving back to the Cortland community. As a member of the gymnastics team, she had the opportunity to volunteer and coach for the Cortland Community Gymnastics program. She loves working with children.

“I do my best in everything I can, whether it is gymnastics, or giving to the community, or classes.”

She also has been a member of the National Society of Leadership and Success since 2018, is the recipient of a Delta Kappa Beta Leadership Scholarship and received a Leadership in Civic Engagement Award from the university’s Institute for Civic Engagement. Speciale has volunteered for organizations including Habitat for Humanity, the Bexar (Texas) County Medical Society and the Food Bank of San Antonio.

Speciale will miss being a SUNY Cortland student because she will be leaving the people that made her college experience special. The friendly dining hall workers, amazing professors, coaches, and all her friends will always have a place in her heart.

“I will definitely miss the people. I love them!”