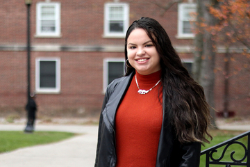 
Talk to Kathleen Altamirano for just a few minutes and you’ll hear her use the same word over and over.

The senior early childhood/childhood education major from the Bronx is a student in the Educational Opportunity Program (EOP) at SUNY Cortland, which provides access and support to students with academic and personal potential.

Altamirano is grateful for the assistance she’s received from EOP, from financial aid to tutoring to the personal connections she’s forged with her fellow EOP classmates. That support has helped her reach her potential both in and out of the classroom and led her to become Cortland’s first recipient of the Norman R. McConney, Jr. Award for EOP Student Excellence.

“EOP gave me so many opportunities,” Altamirano said. “I was an EOP counselor this past summer for incoming EOP freshmen and I am so grateful that they saw something in me to become a leader for others. I’m proud of being an EOP student from SUNY Cortland. It’s definitely a family. Aside from the academic and financial, I can definitely say I can go to EOP for anything, no matter what. EOP definitely holds it down.”

During her first semester on campus, Altamirano struggled in class and landed on academic probation. It wasn’t so much the intellectual challenge of coursework that bothered her. It was her attempts to focus, organize and manage her time that gave her the most trouble.

Overwhelmed by college life, she considered dropping out of school entirely.

Tutoring and one-on-one mentoring from EOP staff, including Academic Counselor Judy Stoddard, helped get Altamirano back on track. Over the ensuing semesters, her GPA rose and Altamirano became active in a variety of clubs and organizations including Women of Color, Spanish Club and the National Society of Leadership and Success. She is the co-founder of a Latin ballroom dance club, Ritmo Latino, and is working toward establishing it as an official club sport before she graduates.

“I’ve just seen her blossom,” Stoddard said. “She can still grow in confidence in herself, but she knows what things she needs to work on now. She’s such a hard worker, I think she realizes that if she puts the hard work in, she’s capable of anything. That’s been wonderful to see. She reaches out for help when she needs to and that’s been key for her.”

By her sophomore year, Altamirano was accepted into Cortland’s Urban Recruitment of Educators (C.U.R.E.) scholarship program, which strives to meet the need for highly qualified teachers in city schools around New York state.

She became a role model and leader for other students during her junior year when she served as a resident assistant.

The notion of caring for others is in Altamirano’s DNA and it’s a major reason why she wants to become a kindergarten teacher and perhaps someday work in special education or counseling. But it starts with her family, parents Alejandro and Martha, and brother Oliver. Her parents have also adopted three siblings from foster care: Allison, Justin and Oscar.

“Ever since I saw my mom helping out for people with needs, especially from the foster care system, I always saw myself as so grateful to have a home with parents who care for children who don’t always get that love and affection,” she said.

Altamirano was beaming during the ceremony at the SUNY Global Center in Manhattan when she received her award. Not only did she get to meet other exceptional EOP students from around the SUNY system, she chatted with SUNY Chancellor Kristina Johnson and her state assemblywoman, Karines Reyes, who presented Altamirano with an additional citation.

So did her parents, who were amazed by their daughter’s achievements.

“They were crying. They were happy. They were excited,” she said. “I know they were very proud and it was emotional at the same time.”

Since news of her award has spread over social media, her family now responds to her calls and text messages with “Hello, famous Kat from the Bronx!”

The inaugural McConney Award for EOP Excellence was given to 42 students from SUNY campuses across the state. The late Norman McConney, who passed away in 2016, was one of the architects of the Educational Opportunity Program and was a champion for addressing inequities faced by economically disadvantaged and underrepresented populations. The award recognizes students who exhibit academic success, perseverance and leadership qualities.

“We are enormously proud of the students receiving these awards today,” Johnson said at the ceremony. “Many of them have overcome enormous obstacles to fulfill goals that once may have seemed unattainable. I applaud every one of them for demonstrating perseverance and determination.”

In the few months she has left in Cortland, Altamirano aims to remain engaged in campus life and be there in support for her EOP classmates and other students. She’s living proof that it’s never too late for a second chance, as long those individuals who need help are willing to put in the work.

“I’m a proud Latina from the Bronx and I’m proud to be the first of my family to go to college,” she said. “I know I have two supporting parents who came to America to chase for a better future for my siblings and I.

“I just want to be the example for other students who come from the Bronx that they can do whatever they set their minds to. Yeah, you can struggle, but you’re the only one stopping yourself if you don’t push yourself.”