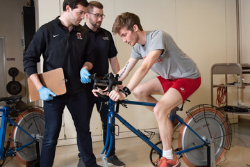 
For some college students, an 8:30 a.m. class on a Tuesday morning can be dreadful.

But for students in a SUNY Cortland biomechanics lab taught by Cabel McCandless ’19, that wasn’t the case.

“Nothing kicked off class better than listening to ‘All Star’ by Smash Mouth before learning about biomechanics,” said Liz Spenser, a junior physical education major from Somers, N.Y.

McCandless, a Lindenhurst, N.Y. native and SUNY Cortland graduate, earned a bachelor’s degree in exercise science in 2019. Now in his second year of graduate school in pursuit of an M.S. in exercise science, McCandless taught the lab portion of biomechanics, a required class for physical education majors at the university.

COVID-19 has forced faculty, staff and students to change from in person classes, to hybrid, to fully remote. While juggling his own studies, athletic career and keeping in compliance with COVID-19 rules for his in person classes, including a 55-minute in person limit and social distancing protocols, lecturer McCandless kept students engaged and made learning fun amid a pandemic.

“Although Cabel was in charge of the lab portion of class, he was also always available to aid students in studying the lecture material,” Samuels said. “His help was always straight forward and simple. There was hardly any confusion.”

Students took note of McCandless’ genuine hope for their success in his class. Expressed through his extensive availability via office hours in person, over Webex, through email and even text message, McCandless was easily reachable for all his students. Additionally, students appreciated McCandless’ attempt to liven up the class by playing music, writing a question of the day on the whiteboard that would constantly spark laughter and conversation and updating everyone on how the Philadelphia Eagles did that particular weekend.

“I didn’t want to add to any other stressors [my students] had going on in their lives,” McCandless said. “Things are so hectic and crazy, so if I could make class as streamline and smooth as possible, where they were still getting the information they needed and were still learning biomechanics, even if they had fun doing it, it definitely was my goal.”

Ideally, labs are better taught in the classroom, but when forced to move remote, McCandless and biomechanics professor Jeffrey Bauer rearranged each lab to accommodate students who did not have access to the necessary computer programs to complete labs. Dartfish, an important computer application for the class, can be costly and requires specific software to use. McCandless and Bauer’s effort to move away from the program gave students peace of mind that they would not fail the lab due to their inability to access Dartfish from home.

Mindful of the unprecedented times his students were facing, McCandless set out to ease his student’s worries. Whether it was offering extra credit in the form of stacking quarters and trying to swipe away the bottom quarter without the tower toppling over or creating study guides for his exams, McCandless created a safe and comfortable environment for his students to learn.

“Cabel is an effective teacher because he is so young and relatable,” said Cat Zamroz, a senior physical education major from Levittown, N.Y. “He truly understands what it is like to be a student taking his class because he was in our shoes a very short time ago.”

McCandless’ ability to relate to and care for his students allowed him to transcend every bump in the road these past two semesters have thrown at the Cortland community.

“For our first remote assignment, he asked us to send him an email telling him how we were holding up,” Zamroz said. “Every email after that was always very encouraging and always told us to contact him if we ever needed to talk about anything whether it was related to biomechanics, running, or just life in general.”

McCandless approached his students in the fall in a similar fashion.

“[The fall] semester especially, there [were] a million other things going on,” McCandless said. “Yeah, school is important, but at the end of the day, you have to make sure that you’re doing OK.”

On top of being an adjunct lecturer, McCandless is also a student-athlete. He has earned Cortland’s Red Letter Award for cross country, given for outstanding athletic skills, team leadership, personal development as a player, or for any combination of reasons, three times in four years.

Additionally, McCandless has been named to the 2019 USTFCCA Cross Country All-Academic Team, earned All-Region honors at the NCAA Div. III cross country regional in 2019, earned second team All-SUNYAC in indoor track for the distance medley relay in 2018 and has consistently been one of Cortland’s top runners since his freshman year in 2016.

Ryan Behre, a senior physical education major from Flemington, N.J., has run alongside McCandless on Cortland’s men’s cross country and track and field teams for the past four years. He just so happened to have McCandless as his lab lecturer too.

“His leadership qualities on the team are definitely replicated in the classroom,” Behre said. “Cabel made me feel included from day one and I feel like he makes all of his students feel safe and comfortable in the classroom.”

McCandless is applying to Temple University’s graduate program for cardiovascular physiology. He hopes to earn a Ph.D. and continue a career in academics and teach at the college level.