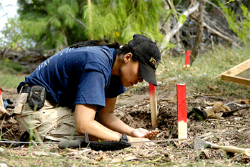 
Death comes to everyone, and many cultures view the end of life as the doorway to another, sometimes better, existence.

In the West however, death is viewed more often as something to be feared and avoided as long as possible.

At SUNY Cortland, the 2018-19 Rozanne M. Brooks Lecture Series will take on the theme of “The Culture of Death.” The six-part series will explore the anxieties felt in some cultures, contextualizing them in the 21st century Western experience.

“Death is certainly inevitable and therefore of interest to all humans,” said Brooks Museum director Sharon Steadman, a SUNY Cortland professor of sociology/anthropology, who organized the lecture series.

Talk topics will include the worldwide use of forensics in analyzing death, revealing statistics on firearm mass murder, the emerging trend embracing capital punishment, interpreting college students’ deathly fear of the wilderness, intentional self-injury as a mode of suicidal expression, and the role of zombies and gothic ideas in modern Latin American filmmaking.

The series will offer a student-run poster session and two guest speakers during the fall semester. Three guest-speakers will lecture during the spring semester.

The series opens on Oct. 3 with a presentation by a student panel titled “Speaking for the Dead: Forensic Anthropology across the Globe.” It will address the modern human drive to pursue emotional closure through learning much more about death’s particulars.

Moderated by anthropologist Kent Johnson, SUNY Cortland assistant professor of sociology/anthropology, the students will profile major contributions from the field of forensic anthropology, which has been instrumental in bringing justice to thousands of people whose family and friends were victims of mass killings and vicious crimes.

Johnson, who earned his doctorate in anthropology from Arizona State University, will offer an introduction to the field of forensic anthropology and summarize the material presented by the students.

Refreshments will be served in lieu of the reception.

On Oct. 17, Joel Capellán, a legal scholar who focuses on statistics and spatial analysis, will share data as he attempts to shed light on crucial unanswered aspects of the phenomenon of mass murder by firearms in light of the inability for institutions to arrive at consensus on the cause.

“When it comes to mass public shootings, the United States is, tragically, in a class on its own,” said Capellán, an assistant professor of law and justice studies at Rowan University.

He will present “Making Sense of the Senseless: Patterns, Motivations and the Etiology of Mass Public Shootings in America.”

“There are more of these attacks in the U.S. than in any other developed country in the world, and the rate of incidence has been accelerating over time,” Capellán said. “Given the devastating and recurring nature of these events, it is surprising that criminologists have devoted very little attention to these massacres.”

According to Capellán, the gap in knowledge has been filled primarily by the media organizations, allowing the media to shape the social construction of mass murder by selecting which events become landmark narratives and therefore “typical” examples.

“The media focus on the most extreme and atypical cases has created a plethora of myths and misconceptions about who, where, how and why mass public shootings occur,” he said.

Capellán has constructed a database of mass public shootings in the United States from 1960 to 2014. This database, created from open-source materials, contains demographic information on offenders and victims, as well as incident-level data on preparation, execution and legal aftermath of the attacks.

During the talk, he will delve into the emerging empirical literature on mass public shootings. He’ll give particular attention to definitional issues, patterns, motivations and the social and psychological processes behind these attacks. Current debates on policy and strategies aimed at preventing and mitigating the lethality of mass public shootings also will be discussed.

Capellán, who earned his Ph.D. in criminal justice from the CUNY Graduate Center in 2016, has an M.A. in social science research from the University of Chicago and a B.A. from Buffalo State College.

America’s abiding thirst to mete out death to those considered to be the worst criminals comes into play in the next talk.

On Nov. 7, sociologist Herbert Haines will give a talk on the potential for the 70-year long, world-wide trend away from executing criminals to take a sudden U-turn.

A professor in SUNY Cortland’s Sociology/Anthropology Department, Haines will present “Capital Punishment and the Rise of Right-Wing Nationalism.”

Haines, who has a doctorate in sociology from University of Kansas, Lawrence, asserts that, since the middle of the 20th century, capital punishment has experienced a broad decline throughout most of the world. This has left the U.S. isolated among Western democratic states in its continued use of the death penalty and has exposed it to pressure and ostracism.

“But the recent rise of right-wing ethno-nationalist parties, particularly in Western Europe, threatens to reduce that pressure and even to reverse the 70-year global trend away from judicial executions,” Haines said.

Sharon Todd, a SUNY Cortland professor of recreation, parks, and leisure studies, plans to explore how current generations, who seem to be spending less and less of their childhood outside, perceive wilderness environments, during a lecture on Feb. 27.

Her talk encompasses research in 1989 and in 2018, when participants’ levels of social and physical anxieties were measured before, during and after a two-week outdoor education practicum in the Adirondack Park.

Janis Whitlock, associate director of Cornell University’s Bronfenbreanner Center for Translational Research, will address how current youth use self-injury to speak and how it serves as a cultural emblem of the age.

“For many contemporary youth, the body serves as a canvas for self-expression,” said Whitlock, whose March 13 discussion is titled “My Blood in Between Heaven and Earth: Self-injury and the Embodied Language of Pain, Power and Vulnerability.”

Whitlock, also serves as lecturer in Cornell’s Department of Human Development & Cornell Institute of Public Affairs, has a doctorate in human development from Cornell University.

On April 3, a Spanish language and culture specialist from University at Albany will give a talk on “Newfangled Vampires and Zombies in Latin American Literature and Film.”

On the lighter side about death in modern culture, Carmen Serrano, an assistant professor of Spanish, has studied how vampire and zombie figures have inspired Latin American films since the 1950s.

She received a Ph.D., in Spanish from University of California, Irvine, with a dissertation titled, “Monsters, Vampires and Doppelgängers: Innovation and Transformation of Gothic Forms in Latin American Narratives.”

Her presentation will illustrate how filmmakers create character vampires and zombies that can appeal to national sensibilities. Serrano also will profile how more recent film representations of vampire attacks, spreading contagion, have become more aggressive, violent and zombie-like.

According to her, 21st century representations in films and television programs go beyond previous examples of contagion propagated through a few monstrous bodies within nation’s borders. Now vampires are represented as belonging to a more complicated dark web, thus expediting complete global and social collapse.

“These entities virtually dismantle national institutions such as the army, the secret service, the police and other organizations important to maintaining a civil society,” Serrano said.

“These themes underscore how profit-driven national institutions and governments, beholden to ominous masters in a more global and interrelated economy, have also placed the nation and its citizens on a fast-track toward destruction.”

The 2018-19 Brooks Lecture Series is sponsored by a grant from Auxiliary Services Corporation (ASC) and the Cortland College Foundation. For more information, contact Steadman at 607-753-2308.