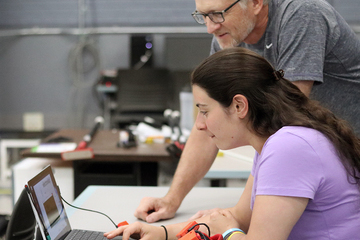 
SUNY Cortland senior Emma Madonna and Kinesiology Professor Jeff Bauer are spending their summer exploring the possible therapeutic use of a new type of shoe.

It’s not what you’re thinking. The footwear isn’t orthopedic.

Jamie O’Neil, associate professor of digital media arts at Canisius College in Buffalo, N.Y., recently created Electroskip, a device that allows dancers to make music as they move. Using sensors placed at the toes and heels and a wireless transmitter, dancers can manipulate musical notes, adding aural expression to their physical performance.

Bauer and Madonna, however, are investigating Electroskip’s potential as a tool to help those with neurological disorders walk and move more confidently and efficiently.

Madonna, an exercise science major from Syracuse, N.Y., is one of eight summer undergraduate research fellows who are working with faculty across campus, exploring topics ranging from purple and common milkweed hybridization to contrapower sexual harassment in the workplace to determining the local abundance of an invasive flatworm.

She is working in conjunction with her faculty mentor, Bauer, and Tim Davis, associate professor in the Physical Education Department and director of the College’s Sensory Integration/Motor Sensory (SIMS) Movement Center, to better understand the use of Electroskip as a clinical tool.

Over six weeks this summer, a child with a neurological disorder will attend twice-weekly sessions in the SIMS lab with the Electroskip sounds being used every other session. The research subject will perform a number of exercises and Madonna will record the data, both through the Electroskip software and video.

In this particular case, the child tends to walk on his toes. The study aims to teach the subject to use his heels, encouraged through the audible feedback from the musical tones. The hope is that this technology can be used in the future during physical therapy sessions to monitor and encourage increased movement and quality of life.

The musical feedback produced by the subject’s movement is arrhythmic, which means patients can progress at their own pace. Other therapies have used metronomic feedback that produce a constant noise that can be tough for some to follow. This therapy may help improve the gait of those with a wide range of neurological issues. Should the technology develop and expand, patients could potentially own a device of their own that would record their optimal pattern and allow them to walk to it in time via an app and headphones.

Gathering data is one of the first steps in this research for Bauer and Madonna. Showing quantitatively that the Electroskip technology can benefit those with neurological disorders may lead to further study and application of the technology.

“It’s a completely new use for their system and they want to learn about it too,” Bauer said. “It makes beeps and boops the way they expected it to and it works nice with choreography and dance. But now that it’s going to move outside of that, how can it be used?

One of Madonna’s main tasks this summer is determining if the Electroskip sensors are delivering reliable digital data. Since the original application of the device was for music and dance, it may ultimately need to be modified for scientific purposes.

Bauer recalls the first time he and Madonna met. It was an 8 a.m. class — her first class on campus as a freshman — and she was full of energy.

So it’s no surprise that she has delved into research as an undergraduate, including a combined research effort between the College’s Kinesiology and Communication Sciences and Disorders departments on how short bursts of strenuous exercise can affect those with Parkinson’s disease. Madonna also has worked with Bauer through the College’s Dartfish Club, which makes use of Dartfish software to analyze video for a variety of athletic applications.

“I’ve always been interested in research,” she said. “I didn’t really know what I wanted to do for a while, but I narrowed in once I got started working with the Parkinson’s research. It interested me in physical therapy and the research fields. I like trying to think of new ways to overcome problems.”

Finding outside-the-box solutions has been a trend in Bauer’s research. The machines he uses in his Parkinson’s work were originally intended for Olympic-level mogul skiers.

Even the F-Scan sensors used in the Electroskip device were adapted from a different field. They were first used for dental purposes, measuring the pressure of a patient’s bite. Then, the F-Scan sensors were used in assessing foot problems for people with diabetes.

Time will tell what Bauer and Madonna uncover this summer. They hope their findings can help those with neurological disorders live better lives. They’re also hoping that their work inspires others in the scientific and academic communities to push creatively for new solutions.

“That’s what we’re trying to do. We’re trying to connect the dots,” Bauer said. “If you find something useful, can it be useful as is to somebody or can it be modified? That’s where the research and understanding of the products really comes in.”