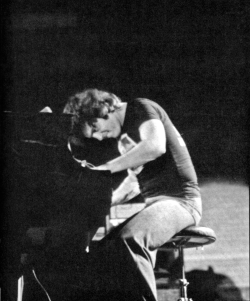 
Over the course of SUNY Cortland’s 150-year history, the college helped launch more than 80,000 careers.

Pop music icon Billy Joel may not be an alum, but you can include him on that list. And Linda Ronstadt. And Neil Diamond, the Eagles and the Grateful Dead. All of them – and many more — honed their skill and built their fan base playing at SUNY Cortland before becoming household names.

From roughly 1960 through 1990, college campuses played an important role in making or breaking a music artist’s career, and few Upstate New York campuses played as active a part as SUNY Cortland.

To commemorate this special time and review lessons relevant to the music industry today, people involved with the local concert scene during that era will hold a panel discussion Saturday, Oct. 6, as part of the College’s 150th Birthday Celebration.

“Dream On, Dream Until Your Dreams Come True: How Musicians Like Billy Joel and The Grateful Dead Helped SUNY Cortland Become an Upstate New York Hub for Music Entrepreneurship” will take place at 10 a.m. in the new lounge area near the Union Station coffee shop in the basement of Corey Union.

The panel is just one of the events scheduled for that weekend that celebrates the SUNY Cortland Sesquicentennial. The centerpiece is the public birthday party scheduled for the night before on the Moffett Center lawn. Performances by campus groups, a giant birthday cake, fireworks and a slide projection on the front of Moffett are planned. Students, faculty, staff and members of the community are all invited to the 6 p.m. event.

That’s the same “everybody’s welcome!” invitation policy for the following day’s panel discussion, which will touch on issues relevant for students interested in business, history, music and communications as well as alumni, community members and parents visiting students for “Family Weekend” who will remember the era and might have attended one of the concerts themselves.

“The music industry has gone through several turbulent upheavals over the last 50 years,” explained Jack Samuels ’73, a professor of recreation, tourism, events and sports management at Montclair State University who — as a Cortland student — was instrumental in bringing acts like the Beach Boys, Billy Joel and the Grateful Dead to campus.

“Those artists and entrepreneurs who survived learned to navigate major technological and business challenges that might seem counterintuitive, and that’s part of what we want to share with students, Samuels said. “We’re going to look back at SUNY Cortland’s storied musical past and its role in launching legendary entertainment careers – many of which are still touring to sold-out crowds. We’ll talk about entrepreneurial survival through passion and staying relevant. Students and community members will discover what success looks like for musicians and artist managers today and how they can benefit from their wisdom.”

Joining Samuels on the panel will be local musicians and music business veterans, including:

The panel discussion will be moderated by Dave Frisina ’77, program director and afternoon drive DJ of Syracuse classic rock station 105.9, The Rebel. Frisina, who has long promoted Central New York musicians through his “Soundcheck” radio show, was a Billboard magazine nominee for Personality of the Year, Music Director of the Year and Program Director of the Year and received a SAMMY for Lifetime Achievement in 2018. He started his career at Cortland with the campus radio station and was a founding member of WSUC-FM.

The panel is one of several initiatives by SUNY Cortland’s alumni Concert Commemoration Committee, which is dedicated to preserving the College’s concert history and helping students succeed in the fields of communications, business, entrepreneurism, music, event management and history.

Ultimately, the group — which Samuels co-chairs — hopes to raise funds for a commemorative sculpture installation in the Corey Union lounge where the panel discussion is scheduled to take place.