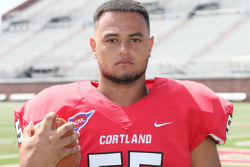 
Kyle Richard hears the same line over and over from his coaches on the football field during practice.

Richard, a junior linebacker and varsity team captain at SUNY Cortland, has taken that lesson to heart. Last year, he helped stop an attack on a young woman even though it nearly cost him his life.

During the summer of 2017, Richard and a friend were at a party on Long Island and interrupted a sexual assault in progress. Richard pursued the assailant, who drew a gun and shot Richard twice, hitting him once in each leg. The bullets missed major arteries and bones by millimeters, allowing Richard to recover in time for football season.

On Saturday, March 10, Richard’s courage will be recognized when he is presented with a Next Generation Award at the Kristin’s Fund gala at Turning Stone Casino and Resort. Kristin’s Fund was established in memory of Kristin Palumbo Longo, who was murdered by her husband in 2009 in Deerfield, Oneida County, N.Y. The charity aims to end domestic violence through prevention, education and awareness campaigns.

Richard is appreciative of this award and those who have labeled him a hero, although he’s not comfortable with that label. He said he is sharing his story in the hopes that others are inspired to step up should they encounter sexual or domestic violence happening around them.

The instinct to act for Richard comes partly from his football experience and also from his mother, Sandra Richard, a sergeant with the Nassau County Police Department and a 30-year veteran in law enforcement. She has always encouraged Richard to take charge in tough situations.

Richard and friends had gathered at a private residence for the party. When a group of strangers from a different party showed up to the location, Richard and a friend decided to go home for the night. Yet as they were walking out the door, they heard screaming coming from inside a bathroom.

That was the moment they decided to investigate. They were able to break through the door and separate the victim and the attacker. As Richard was attempting to speak with the victim, the assailant escaped outside and Richard followed in order to confront him. Before Richard could reach him, the attacker began to shoot, hitting him in each leg. Richard said he heard a final shot, which missed, sail past his left ear.

“I had to say something,” Richard said. “If I didn’t confront that kid, I couldn’t live with myself. There’s no way I wouldn’t do it again. It’s in my blood. I can’t not try to step up.”

Richard spent 20 hours in the hospital and then went to work rehabbing from his injuries as soon as he could. He connected with physical therapist Mike Camp and SUNY Cortland alumnus Jonathan Amato ’03 from Bethpage Physical Therapy. Early sessions with Amato focused on repairing the tissue around the wounds and then Richard shifted to strength training to rebuild his muscle mass.

SUNY Cortland Athletic Trainer Pat Donnelly and former athletic training major Kayla Simpson ’17 helped Richard get back into playing shape once he arrived on campus for training camp. Richard, a kinesiology major who is planning on a career as a strength and conditioning coach, sat out the season-opener against Augustana (Ill.), played briefly in the next game at Framingham (Mass.) State and started each of the next nine games. He finished the season with 75 tackles, three sacks and a pair of fumble recoveries.

“The three words that come to mind are hero, highlight and hardship,” said SUNY Cortland head football coach Dan MacNeill ’79. “He was a hero and that certainly is a real highlight in anybody’s life. And he went through tremendous hardship because of that, too, by getting shot twice. I’ve never in my career had a player return to preseason camp with a bullet wound trying to recover. It says all the right things about the young man in terms of what the circumstances were as they unraveled.”

Richard was named SUNY Cortland Athlete of the Week for his contributions — a career-high 13 tackles — in a 20-17 overtime victory against Alfred University on Oct. 14. That award and the others he’s won in his career at Malverne High School in Lakeview, N.Y. and in the classroom all pale in comparison to the Next Generation Award, he said. He calls this a “life award” and urges others to follow his example and speak up and act on behalf of those suffering from domestic or sexual abuse.

“I just knew this story would help people,” Richard said. “I wouldn’t change it for anything. I got shot twice and I’d get shot twice again doing the same thing. I hope other people would feel the same way.”

As a hard-nosed linebacker, those instincts have served Richard well on the football field. His physical style of play and humble demeanor led his teammates to vote him team captain before his junior season. By stopping a sexual assault, Richard proved himself to be the same type of person off the field.

“I think any time a young man steps up to hero status, it’s always a pleasant surprise,” MacNeill said. “I think everybody wonders what they would do in the same circumstance. Here was a guy who ran straight to help. The situation was an odd one, many people would have backed away, not wanting to draw any attention to it. He broke the door down to help this girl.”

In the months since, Richard has received plenty of praise and support from teammates and friends at SUNY Cortland. There is one phrase he has a hard time hearing.

“I feel it every time someone calls me a hero,” Richard said. “Hero is a strong word.”

He heard the calls for help from a stranger in need and he did what he could to help. Richard hopes that other students follow his lead and do what they can to prevent and stop domestic violence and sexual assault. Say something. Reach out to police or other authorities. Don’t be a bystander.

“I shouldn’t have to be looked at as a hero. This shouldn’t be happening all the time,” he said. “This should be something normal. People should be stopping this sort of stuff all the time. It should be embedded in society that we step up in these situations as men.”