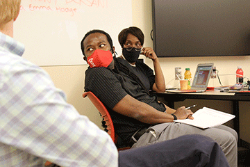 
More than 25 years ago, when SUNY Cortland enrolled students of color numbering in the low single digits, a small cohort of faculty undertook to prepare the rest of the faculty and professional staff for a very different future.

Today approximately a quarter of the student body self-identifies as other than white/non-Latinx and over the course of some 20 years about 200 colleagues have prepared themselves for that future which is now here, through the Summer Institute for Diversity, Equity, Inclusion and Social Justice.

This year’s summer institute, which teaches strategies and techniques for developing an anti-racist and inclusive campus, offered this small and very personalized training program to about two dozen faculty, professional staff and administrators in person June 1 to 3 at Moffett Center.

The three-day institute was facilitated by Seth N. Asumah, SUNY Distinguished Teaching Professor and chair of the Africana Studies Department, Mecke Nagel, professor of philosophy and chair of the university’s Center for Peace, Ethics and Social Justice, and Lorraine Lopez-Janove, chief diversity, equity and inclusion officer.

The institute is presented annually by the Africana Studies Department and the Institutional Equity and Inclusion Office, in partnership with the Anti-Racism Educational Taskforce Subcommittee.

“The Summer Institute for Diversity, Equity and Inclusion was birthed in 1995 after four faculty members, myself included, received faculty development training for multiculturalism, now called diversity, at Williams College in Massachusetts,” said Asumah, who also serves as a Carnegie-University of Ghana Diaspora Fellow.

This pivotal training was organized by the Association of American Colleges and Universities in a project titled “American Commitments: Diversity, Democracy and Liberal Learning,” Asumah explained.

Then SUNY Cortland President Judson H. Taylor supported the early campus diversity efforts upon the arrival of then Provost and Vice President for Academic Affairs Elizabeth Davis-Russell, who would go on to become president of Tubman University in Liberia, Africa.

Asumah and Davis-Russell proceeded to found the Summer Institute, which continues to be endorsed by current President Erik J. Bitterbaum and Provost and Vice President for Academic Affairs Mark Prus.

The Provost’s Office supported the institute from its founding until the past three years, when the Institutional Equity and Inclusion Office formed a partnership with the Africana Studies Department for this faculty development program, first under the former chief diversity officer, James Felton, and currently under Lopez-Janove.

In the years since the Williams College diversity facilitator training, Asumah has participated in more training institutes to solidify Cortland’s diversity, equity and inclusion projects, including at University of Michigan at Ann Arbor, Massachusetts Institute of Technology and the University of Oklahoma. Nagel, his colleague and fellow key institute organizer and co-facilitator since 2004, who formerly chaired the university’s Center for Gender and Intercultural Studies, participated with him in the National Diversity Institute in Washington, D.C.

Highlights of the Summer Institute over the years have included: