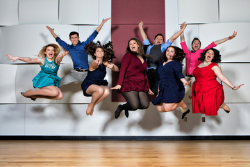 
Eight of SUNY Cortland’s recent musical theatre graduates had the opportunity to show off their skills for industry professionals in the Big Apple.

On May 18, the Performing Arts Department hosted its first musical theatre industry showcase at the Jerry Orbach Theatre in New York City. The eight members of the Class of 2017 — Kayla Arias, Andrew Cuccaro, Nikki Ferrara, Bridget Guardino, Sean Noonan, Matt Spina, Anna Starr and Tara Zebrowski — performed solos, duets and dance in front of show business talent scouts. All eight of those graduates are planning to move to New York to find work in the performing arts field.

“The best-case scenario is getting signed by an agency or getting invited to go to the agency office to talk more to representatives,” said Deena Conley, chair of SUNY Cortland’s Performing Arts Department. “It’s something that schools have been doing for years. We thought it was time.”

Organizing the showcase was a labor of love for Conley and two other Cortland faculty and staff members: Kevin Halpin, associate professor of performing arts and coordinator of musical theatre, and Jeffrey Whetstone, production manager and publicity coordinator.

The first step was hiring professional music director Kristen Rosenfeld to help arrange the performances. Then there was plenty of rehearsal time for the students to prepare. In addition, theatre space in New York had to be rented. Photos and resumes were printed for distribution to agents, and food and lodging logistics had to be sorted out.

“For our seniors, I think this is invaluable and I think this is something, as a department, that we need to do,” Conley said. “I also think it’s something for prospective students and their parents because at this juncture it’s becoming an expectation.”

Unfortunately, not all of the activity was on the stage. May 18, the day of the showcase, was the same day that a troubled and intoxicated man jumped his car onto the crowded sidewalk in Times Square, killing a pedestrian and injuring 20 others. The incident occurred just five blocks south of the Jerry Orbach Theatre shortly before noon, about two hours before the first showcase. Many industry professionals who had planned to attend the event, the first of two, were forced to cancel.

However, the 6 p.m. showcase went off without a hitch.

“What I was really impressed with was that our graduates did not let what happened in the afternoon phase them at all,” Conley said. “They were true professionals and performed as well as they did in the evening performance.”

Conley added that the Performing Arts Department had leaned heavily on its network of alumni working in the industry to help promote the showcase through their contacts. As SUNY Cortland’s showcase grows over time and through word of mouth, graduates will receive more and stronger opportunities in the field, she said.

During Commencement weekend, the Performing Arts Department held a showcase on campus that was open to friends and family and also included the recent graduates who are not immediately moving to New York City for work. Kerby Thompson and Kris Behnke from the Cortland Repertory Theatre were present to review the performances.

As for the New York showcase, Conley said that the recent graduates got a great deal of experience in addition to the exposure in front of talent scouts.

“I think just being in the city and performing before agency representatives was thrilling and scary for them,” Conley said. “It’s that first foray into the business. We try to model as close as we can to what it’s going to be like when they get down to the city.

“We had an agent write us back, saying that he didn’t have anything right now, but he was keeping people in mind for future projects.

“For our first foray, that’s good.”