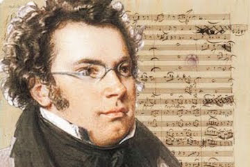 
SUNY Cortland’s College-Community Orchestra, a 70-year-old collaboration between the school and music lovers in Cortland County, will perform “Unfinished Schubert” at 8 p.m. on Tuesday, Dec. 4 in Rose Hall at 19 Court, a former church that has renovated into an arts center by the Dan & Rose McNeil Foundation.

The concert is free and open to the public.

“We are fortunate to be able to offer live classical symphonic music to the community, and are grateful to the McNeil Foundation’s commitment to support the arts in Cortland County,” said Ubaldo Valli, music director of the orchestra.

“Unfinished Symphony” offers selections from diverse genres of the classical music repertoire. The major work on the program is Symphony No. 8, “The Unfinished,” composed by Franz Schubert. Started in 1822, it remained incomplete when Schubert died six years later at the age of 31.

“This symphony is a pillar of the classical era and a precursor of the romantic era,” Valli said. “It is astonishing that such a forward-looking work was composed before Beethoven composed his Symphony No. 9.”

The concert also includes pieces by Peter Schickele (a serious work from a satirical composer better known by his pen name PDQ Bach) and Arthur Sullivan. Sullivan, of Gilbert and Sullivan fame, was deeply influenced by Schubert’s music and discovered many works by Schubert that would otherwise have been lost.

Classical music concerts by the College-Community Orchestra include informal comments by Valli before each piece, highlighting details of interest for the audience and creating a more intimate atmosphere.

“Ubaldo has been a great conductor to work with,” said Jim Weiss, principal cellist and orchestra member since 1982.  “One can always count on him to bring out the best of each member of the orchestra technical and musical expression, blended with his unique sense of humor.”