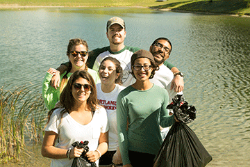 
Action can have consequences, both intended and unintended.

Whether it’s humans deliberately effecting social change in their societies or tiny woodland creatures interacting to create a ripple effect on their immediate surroundings, it’s worth thinking about all the things that can alter the world, sometimes for the better.

At SUNY Cortland, starting on Sept. 25, the 2019-20 Rozanne M. Brooks Lecture Series will take on the theme of “The Power of Action” in four separate lectures or poster sessions.

This fall, an anthropologist will tell how a village in Bosnia-Herzegovina fought off an international development deal to dam their river. A biologist will describe the complex ecological interplay of creatures dwelling just out of sight. Next spring, a health educator will relate how public advocacy is improving lives, most recently with the #MeToo and #BlackLivesMatter movements. A student panel will share their ideas on the power of action.

“This year’s theme addresses the many individual endeavors and social movements that have sought to solve problems and bring an end to social, political and environmental injustice,” said organizer and Brooks Museum director Sharon Steadman, a SUNY Distinguished professor and faculty member in SUNY Cortland’s Sociology/Anthropology Department.

“In addition, this theme allows us to consider various types of ‘action’ that are not immediately observable, but that have real and dramatic effects on our present and future lives,” she said.

The talks will be introduced by Kent Johnson, SUNY Cortland assistant professor of sociology/anthropology, as Steadman will be on sabbatical during the series.

The series opens on Sept. 25, with a presentation on “‘We Will Not Give Up Una!’ Riverine Citizenship and a City in Love with a River in Post-War Bosnia-Herzegovina.”

The speaker, Azra Hromadžić, is an associate professor of anthropology in Syracuse University’s Maxwell School of Citizenship and Public Affairs.

A cultural anthropologist, her research interests are focused on the anthropology of international policy in the context of state-making in postwar Bosnia-Herzegovina. Her book, Citizens of an Empty Nation: Youth and State-making in Postwar Bosnia and Herzegovina(University of Pennsylvania Press), explores the internationally directed postwar intervention policies in Bosnia and Herzegovina and the response of local people, especially youth, to these policy efforts.

The Una River frames the Bosnian northwestern border with Croatia, and is famous for its beauty, fast currents, emerald color, water quality and tourist potential. During the 1990s war, the tributary also was credited with keeping the population of Bihać, a quiet town in northwestern Bosnia-Herzegovina, contented and safe.

In June 2015, Bihać was enveloped in a political protest. According to Hromadžić, thousands of people got together — mostly digitally but also directly — to object to the city’s recent decision that gave concession to a joint Russian and Bosnian energy company to build a dam on the city’s river Una.

“Armed with love for the river and the political agency this emotion generated, the 2015 protest led to a politically significant outcome,” Hromadžić said. “Pressured by the people, the city’s government reversed its decision to grant the concession.”

The steps the townspeople took represented the only reversal of a city government’s decision, on any matter, in the country’s postwar history. Hromadžić made ethnographic observations and gathered data in interviews to examine what Bihaćdid to bring about this political and social outcome.

“My new project — to examine water as a site of ‘vital politics’ — emerged from this moment when the political rule stumbled,” she said.

She spent the spring semester of 2017 as a Fulbright Scholar in Bosnia-Herzegovina where she conducted research and taught at the University of Bihać. This experience propelled her to begin a new research project on water politics and pedagogies, political imagination and infrastructure in Bosnia-Herzegovina.

Hromadžićhas received many awards for her excellence in teaching and research.

Peter Ducey, a SUNY Distinguished Teaching Professor at SUNY Cortland, will lecture on “Amazing Interactions Under Our Feet: Creatures, Stories and Lessons” on Oct. 30.

“Largely unnoticed by most people, yet occurring all around us just beneath the surface, are dramatic interactions among a fantastic set of organisms,” said Ducey, a Biological Sciences Department faculty member who chairs the university’s Undergraduate Research Council.

“Some of the creatures have familiar names but are in actuality much more interesting and important than generally believed,” he said. “Other creatures, including some of the stars of this talk, will be new to most listeners and guaranteed to impress.”

Although outside people’s view, these animals can have significant impacts on above-ground humans. Human actions also have influenced this unnoticed world.

“The ecological interplay will be described in stories of invasions, competition and predation,” Ducey said. “However, we also will explore how historical perspectives on the study of these systems provide insights into the limitations and power of scientific approaches more generally.”

Ducey, who earned his doctorate from the University of Michigan, has served as a consultant to the New York State Department of Environmental Conservation as well as environmental engineering companies on remediation projects. These have included creating a map of amphibian and reptile populations and developing new habitats for the animals.

In 2009, Ducey was honored with an Outstanding Conservationist Award from The Wildlife Society. In 2006, he was presented with the SUNY Chancellor/Research Foundation Recognition for Exemplary Contributions to Research and Scholarship.

Continuing the series in the spring, on Feb. 17, Alexis Blavos, a SUNY Cortland associate professor of health, will discuss “Advocating for our Lives.” Her topic builds on the famous Edmund Burke quote, “The only thing necessary for the triumph of evil is that good [people] do nothing.”

“In the era of oppression, discrimination and fake news, we must advocate for ourselves, and our lives, more than ever,” Blavos said. “We cannot simply do nothing. This means we must come together with passion to organize, research, strategize, implement and persist.”

According to Blavos, advocacy in public health has a history of focusing on funding for health care, school health education, the REACH program and women’s health. She asserts that today’s advocacy is taking on a much more personal focus today with the #MeToo movements and #BlackLivesMatter. Her lecture will explore advocacy skills as it relates to public health and life in general.

“Unless someone like you cares a whole awful lot, nothing is going to get better. It’s not,” Blavos said, quoting Dr. Seuss.

Blavos, who has a doctorate in health from University of Toledo, has an article about #BlackLivesMatter, written with several co-authors, currently under review by the Seneca Falls Dialogue Journal. Her research on assorted public health topics has been published extensively in professional journals. Among many honors for teaching and research, Blavos was recognized in 2014 as Outstanding Health Educator of the Year by the Ohio Society for Public Health Educators. For her engaging and supportive personality, SUNY Cortland students chose her from among all faculty in 2018 to receive the Student Affairs Faculty Connection Award.

The series concludes on March 25 with a presentation by a student panel titled “The Power of Action.” The students will provide various examples of activism across the world that have sought to solve global and local problems.

The 2019-20 Brooks Lecture Series is sponsored by a grant from the Cortland College Foundation, the Sociology/Anthropology Department and the President’s Office. For more information, contact Johnson at 607-753-4557.

TOP LEFT IMAGE: In 2016, six students who are now graduates took part in a cleanup of the Tioughnioga River as a form of hands-on learning. In the center is Stephanie Mele ’18. The others are, clockwise from the lower left: Kristina Georgilis ’17, Molly Butler ’17, Matt Race ’17, C.J. Molina ’18 and Andrea Canale ’17.