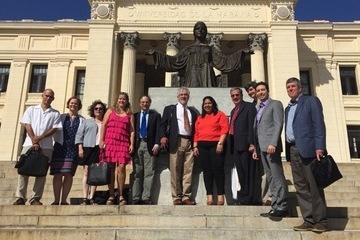 
On June 18, President Donald J. Trump announced a series of new restrictions for Americans traveling to the Communist-controlled island nation of Cuba.

After a fruitful week spent meeting with Cuban university and government officials, the SUNY Cortland visitors were brimming with confidence about future academic opportunities between the two nations, despite the recent chill in Cuban-American relations.

“I don’t think higher education will be affected,” said SUNY Cortland President Erik J. Bitterbaum. “Even during earlier eras, there were always Fulbright Scholars and other exchanges. I think the educational exchanges will go forward for students and for faculty.”

In a Miami speech announcing the changes, Trump pledged to prevent American tourist dollars from flowing to businesses associated with the Cuban military. The Cuban military controls many hotels, gas stations, rental car companies, travel agencies and tourist attractions. The new American-Cuban travel regulations are due to be written in July 2017, putting the scope of future tourist trips to Cuba in doubt.

The move fulfilled a campaign promise to begin rolling back some of the recent normalization that has occurred between the two former Cold War rivals, who initially severed most ties nearly 60 years ago in the wake of a communist revolution led by Fidel Castro. Castro’s brother, Raoul, is now Cuba’s president.

“We talked to Bruce Kleiner, public affairs officer at the U.S. embassy, and the consensus seems to be that educational exchanges will continue to be allowed,” said Mary Schlarb, SUNY Cortland’s director of international programs. “That’s how the two countries have maintained relationships over the last 59 years, through university exchanges.

“If anything changes, it might be maybe more paperwork again," Schlarb continued. "You’ll need a license and you might be audited by the government. It’s not really changing what we’re doing. It might change where we can stay. We won’t be able to stay in government-owned hotels.”

The journey to Cuba had several objectives for SUNY Cortland officials. SUNY Cortland wanted to explore partnerships with Cuban universities and discover opportunities for future faculty-led study-abroad trips. Another objective was to find Cuban collaborators for faculty research projects. Also, SUNY Cortland aimed to strengthen its relationships with Cuban government officials, including González.

“The fifth was to generally get a better understanding of the higher education system in Cuba and the context, the cultural, historical and economic context, so when we’re working in Cuba, we understand our partners better,” Schlarb said. “We want to understand their interests and needs so we can create some mutually beneficial initiatives. I really feel like we did that.”

Not only does SUNY Cortland hope to send faculty and students to Cuba as the partnership develops, the College also aims to bring Cuban students and faculty to campus as part of an exchange program.

“The SUNY system is the only system that has signed a memorandum of understanding with the minister of higher education,” Bitterbaum said. “We have an opportunity for a special relationship with Cuba.”

SUNY Cortland has worked toward building its relationship with Cuban universities for years. Kobritz, a former owner of Triple-A and Single-A baseball teams, has served as a senior advisor to the Caribbean Baseball Initiative since 2011. CBI tries to connect Cuba and the United States through baseball clinics, conferences and games. In fact, CBI hosted a symposium at SUNY Cortland on April 28, 2016 that featured former Secretary of Defense William S. Cohen and many other experts on American-Cuban relations.

On Sept. 28, 2016, Miguel Fraga, the first secretary of the Cuban embassy in Washington, D.C., spoke at SUNY Cortland, delivering a lecture entitled “U.S.-Cuban Relations, Past, Present and Desired Future.”

Last month, a group of 17 SUNY Cortland students travelled to Cuba with Bonni Hodges, chair and professor of health, Justin Lovich, coordinator of international studies in sport management and Lori Schlicht, associate director for academic engagement. The six-credit summer program gave students an opportunity to explore Cuba through the lenses of art, baseball, history and politics.

"It was a life-changing experience for those who had never been out of the country," Bitterbaum said. "It's an opportunity for faculty and staff and students to experience a different culture as part of our globalization and internationalization initiatives."

SUNY Cortland's strong academic programs in health, kinesiology, recreation and physical education figure to be the primary tie-ins with Cuba in the early stages of a partnership, particularly with the school for physical culture and sports in Havana. Relationships for art, music and performing arts students through the Ludwig Foundation also have a variety of Cuban counterparts.

However, the academic potential of SUNY Cortland’s Cuban university partnership will grow over time to include all disciplines. Donovan, who specializes in ceramics, sees a number of interdisciplinary links between anthropology, economics and geology in his research. No stranger to study abroad opportunities, Donovan has brought Cortland students to Belize and China in recent years.

He sees the study of ceramics as a "doorway into a culture" and hopes that future trips to Cuba will enlighten SUNY Cortland students about the rich history Cuba has to offer.

“The whole place just seemed really ripe for forming connections," Donovan said. "I mentioned to the group that I’m very interested in continuing to expand the connections and the opportunities that presented themselves to all of us and see how I can channel this energy into developing at least a pilot program."

The College has invited Cuban academics and administrators to visit campus this fall. Donovan is working to bring a pilot group of students to Cuba for art and art history research in the spring of 2018.

"What has always filled every one of my programs that I’ve led over the last 20 years is that I’m just excited about the opportunities," Donovan said. "I can see how this would be just an incredible, life-changing experience for a student."