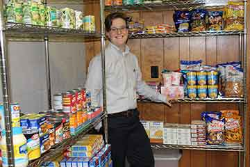 
Sadly, some college students are no strangers to hunger.

Out of 301 SUNY Cortland students who responded to a recent College survey, a majority of whom lived off campus, more than one-third replied that they had gone to bed hungry while attending college because of lack of finances.

Like the growing number of other colleges, including at least six SUNY campuses, SUNY Cortland is doing something about it.

“A lot of schools have started to implement student food pantries because they are seeing food insecurity among students,” said Lauren Herman, a health educator with the Health Promotions Office who serves on the committee that created a food pantry.

The College opened the SUNY Cortland Cupboard on Nov. 6 in the basement of the Interfaith Center at 7 Calvert St., on the corner opposite Dowd Performing Arts Center.

The food pantry for students, which is presently filled with shelves of non-perishable items, is in a small room off the Interfaith Center’s basement community room. It is lined by new metal shelves, purchased thanks to a $750 gift from the President’s Cabinet.

On the first day, a trickle of visitors had stopped by to check it out during the noon hour.

The volunteer, ad hoc committee that has spent the last six months planning the operation, decided the SUNY Cortland Cupboard will be open weekdays from noon to 1 p.m. for the rest of the semester. Updates are being provided on the pantry's progress.

A week before the food pantry opened, only about six containers of food sat on its shelves. Faculty, staff and students began to donate items as news of the effort spread gradually. In light of fundraising for the U.S. hurricane disasters and the many annual food drives currently underway, food pantry committee members were reluctant to dilute those worthy efforts by making a strong pitch for the very same things.

Then Paul Nojaim, owner of the former Nojaim Brothers Supermarket in Syracuse, N.Y., heard about the College’s undertaking through his friend, SUNY Cortland Risk Management Officer Bill Veit. His approximately 30-40 donated baskets of food, some 60 percent of what now stocks the pantry, were delivered early on Nov. 6, turning what was intended as a “soft-opening” week into a fully operational food pantry.

About a third of the food items were given by alumni, who presented cash gifts indicating “campus food pantry” through the Cortland College Foundation that were used by pantry volunteers to stock the shelves. Groton resident Carl Gambitta ’63, M’66, C.A.S. ’73, a SUNY Cortland Alumni Association board member and former president, heard about the need during a Nov. 2 committee meeting and coordinated many of those donations. Fellow board member Ronnie Sternin Silver ’67 of Saratoga Springs, N.Y., has followed the project’s progress by teleconferencing into the meetings. On Nov. 7, she reached out to alumni with an electronic letter asking her classmates for future support of monetary gifts or non-perishable food or necessities.

Gambitta and Silver and the faculty, staff and students on the ad hoc committee of about 25 people who have spent the past six months bringing the project to life. A number of students have been involved in the needs survey and planning for the pantry, including junior Alexandra “Alex” Cicero, the student volunteer project coordinator. The undertaking has achieved broad campus support from the President’s Cabinet, the Faculty Senate and the Student Government Association. The Alumni Association and the Cortland College Foundation also are on board with the project. Natasha McFadden, assistant director to The Cortland Fund, serves as a fund-raising liaison as pantry donations may be considered as gifts to the College. Esa Merson, director of the Academic Support and Achievement Program, is in a good position to see occasions where food insecurity is destroying the college experience for a student. Rachel Ditch, interim Protestant campus minister at the Interfaith Center, welcomed the food pantry to operate from the Interfaith Center, which she manages. She anticipates incorporating the operation into the CROP Walk program that raises money to feed the hungry.

Herman, in the Health Promotions Office, worked closely with an academic department, the Health Department, to study the problem of hunger at Cortland, which until then had been shared by mostly word-of-mouth. A one-week survey was conducted during October to gather information on the students. Of the 301 respondents, 66.9 percent lived off campus. Almost 30 percent of those said their whole semester tuition bill was covered by financial aid. Just a few more than 10 percent said they have used a soup kitchen or food pantry before.

“I think there’s growing awareness about how food insecurity could happen at one point and not at another,” Herman said. “But there’s not a time or space to talk about it or create the awareness about it. We want to raise that awareness.”

The committee is looking into the causes of hunger among the student body. All students living in on-campus housing have a meal plan that covers them throughout their time on campus. However, many students do not live on campus and West Campus Apartments residents aren’t required to have a meal plan. Local community food pantries are a very long walk between classes for such students.

“We still don’t have all the information, but anecdotally sometimes students’ families don’t have enough money to get by themselves,” Herman said. “We may assume they have parents or guardians who are helping them out. But many of them didn’t have people helping them out in high school. They are trying to sustain themselves here but they don’t have any support.”

“As time goes by, we might be able to get a better handle on more definitive data on how often, at what points during semester, we might see peaks of need,” said John Suarez, who directs the College’s Institute for Civic Engagement. “This might tend to be toward the end of the semester.”

It’s a question where future pantry stock will come from. Six months from now, the SUNY Cortland Cupboard should meet the food handling requirements to receive the support from the Food Bank of Central New York.

Once the panty is running smoothly with canned and dried food items, the committee may expand to accept donations of personal items like soap and toothpaste. The pantry has a refrigerator, but operators will need to set professional parameters on what fresh foods can be accepted and how to safely store, control and distribute them.

Running the pantry creates an unending need for more civic-minded citizens to help out.

“It could be that when we’re looking for volunteers for the pantry, someone who has benefited from the pantry might help out,” Suarez said. “That would be awesome.”

“It definitely will increase the likelihood that students will graduate because if they aren’t focusing on food or money they can focus on their education,” Herman said.

Those who would like to make a contribution to the SUNY Cortland Cupboard can do so through the Cortland College Foundation via mail at P.O. Box 2000, Cortland, NY 13045 or telephone at 607-753-5744 or online at RedDragonNetwork.org/giving.