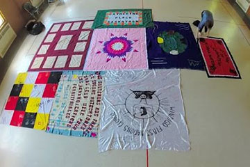 
An interactive group exercise to raise awareness of the history of the relationship between indigenous and non-indigenous peoples will be held Thursday, Oct. 4, on campus.

The event, titled “Witness to Injustice: Unraveling Historic Native and U.S. Relations,” will be led by Neighbors of the Onondaga Nation (NOON) at 4:30 p.m. in Corey Union Function Room.

Sponsored by the Native American Studies program, the event is free and open to the public.

NOON member Cindy Squillace, her husband Jack Manno and several Ongwehonwe members adapted the Blanket Exercise to include Haudenosaunee history, including the Sullivan-Clinton Campaign of 1779. Squillace is a co-facilitator of the adapted Blanket Exercise for audiences in this region.

They will impart the Blanket Exercise, a one-and-one-half-hour teaching tool that uses participatory education to raise awareness of the history of the relationship between indigenous and non-indigenous peoples in the part of the world now known as the United States. Through the use of meaningful quotes and blankets that represent part of Turtle Island (the Western Hemisphere), they explore this shared history that most people rarely learn in traditional settings. The group engages in a conversation about the European colonization of Turtle Island in order to deepen our understanding of the denial of indigenous peoples’ nationhood throughout U.S. history.

The Blanket Exercise was developed by the KAIROS Organization in Canada in response to the Royal Commission on Aboriginal Peoples report in 1996 that sought to foster justice and peace between indigenous and non-indigenous peoples of Canada. Through reports, community visits and testimony, the Canadian government placed itself among the colonizing governments that had done wrong to indigenous people.

This program is also sponsored by the Center for Gender and Intercultural Studies and the Provost and Vice President for Academic Affairs Office.