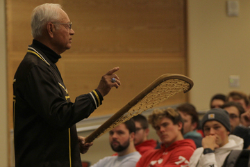 
Sid Jamieson ’64 is a key figure in the history of collegiate lacrosse.

He was the head coach of the men’s lacrosse team at Bucknell University from its inception in 1968 until his retirement in 2005. He has been inducted into numerous halls of fame, including the SUNY Cortland C-Club.

Jamieson remains the only Native American to have served as head coach of a Division I men’s lacrosse team.

He returned to Cortland, however, not to speak about his own role in lacrosse but about the ancient history of the “Creator’s game.” Jamieson lectured in Sperry Center on Nov. 21 as part of Native American Heritage Month.

“The history and culture of the Creator’s game is older than any written history,” he said. “It’s the only indigenous game played in the country and it’s played for spiritual, physical and ceremonial reasons. Field lacrosse was the first team game in North America. The actual game itself was ferocious. The winner often took a bounty and players were and still are selected and approved by clans.”

Jamieson explained that the modern game of field lacrosse is much different than variations still played by Native Americans today. Box lacrosse, typically played indoors on an ice hockey rink, is popular, especially in Canada. Medicine games are also played as ceremonies to aid those who are ill.

“The medicine game is played as an interwoven community display of strength for good medicine and helping the sick,” he said. “Only the wooden sticks can be used. The reason is that it was at one time a living piece of a tree. This has a spirit. Whoever took this and made a lacrosse stick out of it has a piece of the spirit embedded in this stick.”

Native American contributions to the formation of the United States’ government was another topic of Jamieson’s lecture. He mentioned the speech of Canasatego, the Onondaga leader, at the Treaty of Lancaster in 1744, in which he urged the American colonies to follow the Iroquois in forming a confederacy.

Jamieson also mentioned a Senate resolution passed in 1987 that acknowledged the “contribution of the Iroquois Confederacy of Nations to the development of the United States Constitution.”

“How many of you have ever seen that in your printed history books?” Jamieson asked. “That’s where this form of government you have today comes from. In 1744, this idea was planted in the founding father’s heads. They took it and that’s what we have today.”

Jamieson, a member of Cayuga Nation, was a first-generation college student. He played football for four years, lacrosse for three years and baseball for one season at Cortland and graduated with a bachelor’s degree in physical education.

In addition to coaching lacrosse at Bucknell for 38 years, he was an assistant on the football coaching staff there for 25 years as well.

Jamieson has won numerous awards, including Division I Coach of the Year, Iroquois Nationals Lifetime Achievement Award, the Spirit of Tewaarton Award and the Gen. George M. Gelston Award as the person who “most represents the symbol of the game of lacrosse.”

He became co-founder and head coach of the Iroquois National Team in 1983 and took the team around the world, including trips to England, Australia and Japan.

During a 10-day exhibition tour with the English National Team in 1985, Jamieson and the members of the Iroquois team met with students at the Stockport Grammar School for a question-and-answer session. The hurtful responses from the children have driven him to share the history and the culture of lacrosse and by extension, Native Americans.

“’What do you eat?’” Jamieson recalls them asking. “’Do you live inside a fence? How does the smoke get out of your house? Do you hurt people?’

“It wasn’t that long ago we took that trip,” he said.

Jamieson, however, does see modern college lacrosse becoming more open to Native American culture. He lauded University at Albany coach Scott Marr for his recruitment and respect for Native Americans.

“I’m the only Native American head coach ever in Division I lacrosse,” Jamieson said. “That’s not a good thing. I don’t pride myself on that. The native people have their territories and they do their thing and they keep their culture and their traditions. That’s a good thing. There’s nothing wrong with that whatsoever.

“But it’s extremely difficult when you have to leave your community and come into an environment like this and not be able to leave for your ceremonies, not to be able to eat the white corn soup and do the things you would traditionally do at home.”

Jamieson’s efforts to preserve and share Native American culture extend far beyond the lacrosse field. He served on the Advisory Board to the Chesapeake Conservancy and on the board of directors of the Greenwoods Land Conservancy. His work led to the National Park Service recognizing the Susquehanna River as a National Historic Water Trail in 2006.