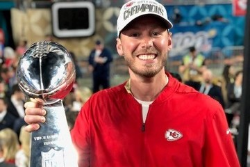 
Mitch Reynolds ’10 of the Kansas City Chiefs didn’t score a touchdown this past season. He didn’t record a tackle. In fact, he didn’t play a single snap.

But Reynolds, the Chiefs’ director of team operations, was a key factor in the team’s Feb. 2 victory in Super Bowl LIV.

Orchestrating the team’s travel requirements is a giant part of Reynolds’ responsibilities. For a regular season road game, that means coordinating flights for 175 people — players, coaches, trainers and other gameday staff —  plus all of the helmets and gear necessary for an NFL game. It means coordinating with airlines, bus companies, hotels and police escorts to ensure everything gets where it needs to be.

It’s a high-pressure, detail-oriented role, down to thermostats and the contents of head coach Andy Reid’s refrigerator.

“You need to be very, very thorough in communication,” Reynolds said. “You can’t leave any gray area. You have to count on other people to do their jobs so you can do yours. I have specs on what we need, everything from the temperature of our meeting room space to how many Coke Zeroes we keep in coach Reid’s office.”

Win, lose or draw, Reynolds makes sure the Kansas City players and coaches get where they need to go. It was mostly wins for the Chiefs this year, as the team went 12-4 in the regular season to win the AFC West and then beat the Houston Texans and Tennessee Titans in the AFC playoffs to reach the Super Bowl.

The Super Bowl made a regular season road game with a traveling party of 175 look quaint. Reynolds had to coordinate arrangements for 2,000 people, including four charter flights to Miami for friends and family members of the Kansas City players, coaches and staff.

Reynolds estimates he got about three hours of sleep each night in the two weeks leading up to the game, working around the clock to make sure everyone in the organization was accommodated.

“The biggest compliment was that our players and coaches thought it was the smoothest week ever,” he said. “They couldn’t imagine a smoother week. They thought it was like a regular week, if not better. And that’s the goal. That’s amazing.”

The 2019 season wasn’t without its moments of chaos for Reynolds. On the morning of a crucial Week 14 game at the New England Patriots on Dec. 8, Reynolds got a call from a coworker that the Chiefs’ helmets hadn’t arrived at Gillette Stadium.

A mistake caused the gear to remain on the team plane when it landed at the Providence, R.I. airport. Massachusetts high school football games at the stadium on Saturday didn’t allow Chiefs staffers to set up the locker room the night before like they usually do. Because of that, no one realized the helmets were missing until gameday.

The problem? The helmets, accidentally left on the plane, had been flown to Newark, N.J.

Some quick thinking and teamwork between Reynolds, airline employees, NFL staffers and the Massachusetts State Police had the helmets flown into Boston and delivered by police escort to the stadium by 2:30 p.m., two hours before kickoff.

By the time the public got wind of the situation, with some reporters speculating the Chiefs may have to forfeit the game, Reynolds had already solved the problem.

Despite the challenges, this remains Reynolds’ dream job. After all, pro football is a way of life for Reynolds’ family. His grandfather, Henry Kunttu, was the Buffalo Bills’ video coordinator from 1970 to 2010 and Reynolds’ uncle, Erik Kunttu, currently serves as the Detroit Lions’ director of video operations.

Reynolds, who grew up in the Buffalo area, helped out on the Bills’ sidelines as a ballboy when he was a youngster, doing laundry and later in video operations. He continued to work for the team during his time as a sport management major at Cortland and was hired as an intern the day after Commencement in 2010.

The 2011 NFL lockout, in which team owners imposed a work stoppage for more than five months, led to Reynolds being laid off. He sent a resume to the 31 other NFL teams and quickly found a home in Kansas City, where he’s thrived ever since.

That history with the organization made the Chiefs’ 31-20 come-from-behind victory in the Super Bowl that much sweeter for Reynolds. Standing on the field at Hard Rock Stadium in Miami, holding the Lombardi Trophy as the confetti fell was a moment he had been striving for his whole life.

“When we won, it was a state of euphoria,” he said. “It was amazing. It was a total dream come true. My grandfather was in it for 42 years and my uncle is video director for the Detroit Lions. No one has ever had a ring. As a kid, it was my dream to win a Super Bowl and I finally did it and it was amazing.”

That was just the beginning of the party. The team and their family members returned to the team hotel for an all-night concert for 2,500 featuring Pitbull and Flo Rida in a ballroom that had been used for a team meeting just hours before.

You guessed it — Reynolds worked with hotel staff to swap out tables and chairs for a stage, lighting and bars.

After a grueling two weeks of logistics and planning, watching the players and coaches celebrate with their families and friends into the wee hours made Reynolds reflect on the value of his work.

“Some of these people had never been on a charter before and had never had a police escort,” he said. “To see the joy on their faces was awesome. I love serving this team, I love serving others and all of that hard work had paid off when you saw how happy everyone was.”