Female Force a force for empowerment 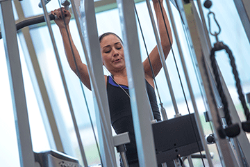 
Working out at the gym doesn’t need to be scary or lonely. The new club, Female Force, hopes to ease these worries.

“I think it’s so important to know that you’re not the only one out there,” said club president Meghan Morales.

The focus of Female Force is to empower individuals through health and fitness and serve as an outlet for all looking to build connections and themselves. The club, which became active in Spring 2020, enforces a judgement free zone inclusive for all.

Morales, a junior fitness development major and sports studies minor from Ossining, N.Y., knew she wanted to leave an impact on campus. She hopes to empower individuals while promoting health and fitness with her club. She, too, has faced adversity when it comes to working out.

“I started weightlifting, and when I walked into the weight room, they thought I was making up gym,” Morales said. “They didn’t think I was coming in to workout. People laughed at me, looked at me weird, like ‘What is she doing?’”

The club will host events tackling topics such as body image and nutrition. Morales and her E-board are working on organizing physical activity workshops in the future. Their current focus is fitness networking and growing membership of their club.

Female Force faced a tough challenge when it appeared before Cortland’s Student Government Association (SGA) last fall. Concerns revolved around the potential for injury and whether Female Force would better serve as a recreational sport.

“It was a struggle to get through the SGA process,” Morales said. “I felt like I was getting grilled up there.”

After intense debate between senators, Female Force was officially voted in as a new club.

“It sounded like a cool idea because we have a lot of great athletic facilities on campus,” SGA senator Kerry Donnelly said of why she supported the club.

“What’s the point of resources if you don’t know how to use them?” said Donnelly, a junior communication studies major from Croton on Hudson, N.Y.

Any student is encouraged to join Female Force, which meets on Wednesdays at 7 p.m. in Park Center, Room 1131. The name shouldn’t serve as a deterrent to fitness conscious males or gender non-binary individuals.

“The name is Female Force because the idea came from just how women have been treated in the world of health and fitness,” Morales said. “I think it’s important that everyone is welcome to come and share their own struggles with us.”