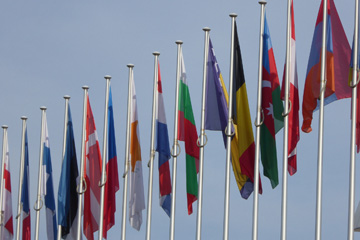 Only two other higher education institutions in the U.S. — the University of Wisconsin at Madison and the University of New Mexico — received the same EU Erasmus+ Jean Monnet Module grant that SUNY Cortland earned in 2015. The funding provides 30,000 euros, or the equivalent of approximately $34,000, to develop a robust program at the College that focuses on European studies.

The major piece will be an introductory course open to all majors on the political-economic union of 28 member states that is the EU. Six SUNY Cortland professors from six different academic departments will team teach the course in addition to a faculty member from Babes-Bolyai University in Romania, who will connect to the classroom through SUNY’s Collaborative Online International Learning (COIL) network.

“Our discussion will be wider rather than deeper,” said Alexandru Balas, the director of the Clark Center for International Education and an assistant professor of international studies. “The course is meant to give our students a taste of the European Union, especially at a time when so many of them are going to study abroad in places such as Spain, Germany, France, Ireland and the United Kingdom.

“It’s meant to educate them on the complex construction of the EU, which is not an international organization nor is it a state. It’s something in between.”

SUNY Cortland’s new program offering comes at a time when there’s plenty of buzz surrounding the EU, especially as it relates to immigration and negotiations with the U.S. on the Transatlantic Trade and Investment Partnership (TTIP).

“This means basically a free trade area between the U.S. and the EU — no more trade barriers, no more taxes, no more tariffs, which is going to impact us on a major level,” Balas said, describing the proposed agreement that aims to spur economic growth. “It’s being negotiated right now very much behind closed doors by U.S. Congress representatives and EU parliamentarians.

“It’s major — not only in the field of European studies, but for all citizens. I’m trying to teach students in all of my classes: if this gets passed, there are going to be a lot of issues both good and bad.”

The College’s new interdisciplinary course, which will be offered once a year for the next three years beginning in the spring, will rely on teaching from academic departments in all three of SUNY Cortland’s schools: art and art history, foundations and social advocacy, history, international studies, political science and sport management. Key issues that students will tackle include conflict resolution; terrorism and immigration on EU soil; the roles of art and sport management in EU construction; and many more topics that carry political and economic weight.

“The course is meant to be attractive to students from all majors across campus because the EU touches on everything,” Balas said.

Besides the new academic offering, the grant will fund activities for a new, College-wide EU Day; a separate course that involves Model European Union participation; and academic film screenings for campus community members.

“The EU Day will look to infuse European studies on our campus,” Balas said. “People will understand things like why Greece is falling apart and what’s going on with all of the immigrants that the EU doesn’t know what to do with.”

The one-day event will take place for the first time this spring and likely will include a keynote speaker as well as undergraduate research to be presented at Transformations, the College’s annual celebration of scholarly student work. The Model EU course will be taught during the opposite semester as the introductory EU offering and it will take students to Brussels, the capital of the EU, or New York City, depending on the location of the year’s international conference.

“Receiving this grant is meaningful on so many levels,” said Balas, noting the major contributions of the College’s Research and Sponsored Programs Office. “It means that SUNY Cortland is part of a distinguished network of U.S. colleges and universities that are committed to developing a European Union studies angle on their campuses.”