Diplomat of Romania will Discuss Experiences 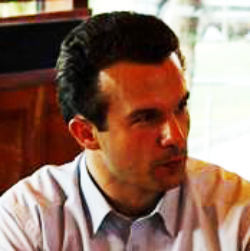 
Working diplomat Ionut Lacusta will share his experiences in being a Romanian native as well as details about his remarkable career, during two presentations at SUNY Cortland on Nov. 20 and 21.

A graduate of Georgetown University School of Foreign Service with an M.A. in security studies, Lacusta is visiting the campus while he pursues an M.A. in public administration at the Harvard Kennedy School of Government.

On Friday, Nov. 21, he will discuss “Working as an International Diplomat” at 12:45 p.m. in Old Main, Room 230. The talk targets international studies majors as well as anyone who is interested in learning more about an international career.

Both seminars are free and open to the public.

Regarding the first lecture, organizer Alexandru Balas, an assistant professor of international studies and director of the Clark Center for International Education (CCII), noted that 2014 marks 25 years since the fall of the Berlin Wall and the end of Communism in Central and Eastern Europe.

“A native of the region, Lacusta will assess the Democratic changes that occurred in the past quarter of a century in Central and Eastern Europe and beyond,” Balas said.

In the second talk, Lacusta will inform the audience on the skills and tools needed to be a diplomat, as well as what to focus on during their college years, Balas said. He also will explain what it is like to work as a diplomat and its challenges and benefits.

“He is a former foreign policy advisor for the offices of a legislative speaker and the head of state and served as a foreign affairs advisor to the President of the Chamber,” Balas said. “In addition to foreign policy, he covered energy security and infrastructure development with national and European Union institutions.”

The presentations are sponsored by the International Studies Program, the CCII, the Project on Eastern and Central Europe, the Political Science Department, the International Programs Office and the Campus Artist and Lecture Series.