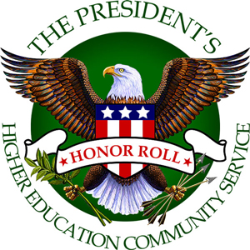 
SUNY Cortland has once again been named to President Barack Obama’s 2012 Higher Education Community Service Honor Roll with Distinction. The 2012 honor roll marks the sixth consecutive year SUNY Cortland has won national recognition for its civic engagement programs and the second time the College received the elite “with distinction” designation.

“This isn’t an award that recognizes a small group of people,” said Richard Kendrick, the director of the College’s Institute for Civic Engagement and a professor of sociology/anthropology. “This is an award to be shared by the entire SUNY Cortland campus community and our many community partners. Every department and division at the College contributed to our success in earning this award.”

A total of 2,853 students from the College contributed 180,810 community service hours during the 2010-11 academic year. More than 1,200 of those students contributed at least 20 hours of volunteer work, according to Kendrick.

Since 2006, the Corporation for National and Community Service (CNCS), a federal agency that fosters civic engagement through service and volunteering, has presented the annual honor to colleges and universities to recognize exemplary community service. The corporation administers programs that include AmeriCorps, Senior Corps and Learn and Serve America.

Of the 642 schools recognized as honor roll members, 110 received distinction honors, including two other SUNY institutions. The full honor list is available from the CNCS.

“We talk so much about students having transformational education experiences,” Kendrick said. “By encouraging them to do meaningful work in their own communities, they’re able to find those experiences.”

• The SUNY Cortland AmeriCorps program, which completed its third year in 2010-11, served 13 community agencies, focusing on needs identified through the annual community-wide assessment process dubbed “Cortland Counts.” Through AmeriCorps alone, nearly 600 students were recruited to volunteer 6,209 hours of their time to agencies that included the YWCA, the Cortland Downtown Partnership, the Lime Hollow Center for Environment and Culture and the Seven Valleys Health Coalition. One of only three SUNY institutions to run an AmeriCorps program, the College helped develop the local Cortland community through volunteer recruitment, infrastructure improvement and the development of websites and promotional materials for community agencies.

• Future teachers tutored and mentored 200 students from the Syracuse (N.Y.) City School District through Cortland’s Urban Recruitment of Educators (C.U.R.E.) program, which celebrated its 13th year in 2010-11. The group seeks to improve urban education by developing teachers who are proficient at dealing with conditions in high-needs schools. In 2010-11, pairs of college students helped teachers individualize instruction through tutoring sessions in a variety of subjects. Sixty-three percent of SUNY Cortland graduates who participate in C.U.R.E. have taught for at least two years in high-needs schools throughout New York state.

• SUNY Cortland students and faculty from the Recreation, Parks and Leisure Studies Department helped Cortland Junior/Senior High School in running the League 56 Academy, an after-school program in its third year that combats bullying among fifth and sixth graders. Children participating in the program showed a decrease in aggressive behavior, and an increase in mentor-type relationships with adults.

• Three Youth Assist programs of Family Counseling Services — in one-on-one mentoring, group mentoring and homework help — received 1,570 volunteer hours from SUNY Cortland students. The programs were designed to build confidence and develop appropriate social, communication and decision-making skills through interaction with positive role models. Seventy-four SUNY Cortland students offered their time to 49 middle and high school students in the programs. The high school and middle school students raised their grades from an average of 73 to an average of 80, and parents reported improvements in their children’s social skills and levels of confidence.

As part of the honor roll application, the College was required to demonstrate a commitment to its civic engagement activities and its participation in organizations that support and sustain civic engagement. One of those organizations is the Main Street SUNY Cortland outreach facility at 9 Main St. in Cortland. That building houses some of the activities of the Institute for Civic Engagement, the College’s AmeriCorps program, the Cortland Downtown Partnership and the Center for Economic Education.

The Main Street building also includes the Beard Building Gallery — a teaching gallery for SUNY Cortland art students during the academic year and a gallery programmed by the Cortland Cultural Council during the summer. The College’s new civic engagement program coordinator, a position created in June, works out of the Main Street SUNY Cortland facility.

“The work that the Institute for Civic Engagement does isn’t possible without the relationships the College has formed with its community partners,” Kendrick said. “This award is a tribute to the best that our faculty, staff, student and community members have to offer.”

In many ways, SUNY Cortland’s outreach efforts have become a blueprint for other SUNY institutions to follow, Kendrick said. Increasing the number of campuses to make the President’s honor roll each year is a metric used by the SUNY Report Card to measure the system’s success toward enhancing vibrant communities across New York.